Breakable by Tammara Webber, published by Penguin on 7th May 2014

Goodreads synopsis:
As a child, Landon Lucas Maxfield believed his life was perfect and looked forward to a future filled with promise — until tragedy tore his family apart and made him doubt everything he ever believed.

All he wanted was to leave the past behind. When he met Jacqueline Wallace, his desire to be everything she needed came so easy…

As easy as it could be for a man who learned that the soul is breakable and that everything you hoped for could be ripped away in a heartbeat. 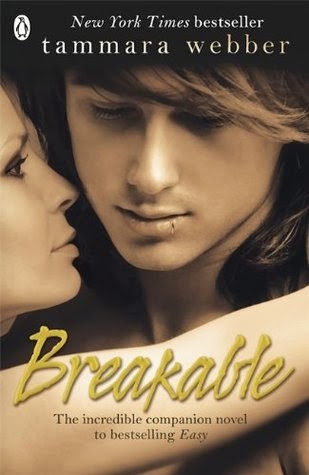 Review:
'Breakable' is the exquisitely written and heart-breaking companion novel to Tammara Webber's 'Easy'.  This isn't a sequel but more of a prequel which takes the reader back to the beginning of Lucas and Jacqueline's relationship, presenting events from Lucas's point of view.  The story also encompasses Lucas's life before he met Jacqueline, when he went by his first name Landon and was an innocent teenage boy with his whole future ahead of him. Changed forever by an unspeakable tragedy, he has to try and put his life back together again, even when he has no idea what his future might hold.

Gut-wrenching in it's emotional intensity, 'Breakable' will quite literally break your heart in two.  Having already been familiar with certain aspects of Lucas's story from 'Easy'', I knew the terrible emotional trauma he had suffered but experiencing it all again and hearing about it in his words put it into a whole new perspective.  I felt like I developed a much greater understanding of his character and fell in love with him all over again.  I admired his integrity and determination to make something of himself and I enjoyed seeing his relationships develop with his best-friend Boyce and his Grandpa.  I also loved seeing how he felt about Jacqueline and the way in which he respected her and treasured her as something very precious.

If you haven't yet read 'Easy' then you would still enjoy this book regardless but I would strongly urge you to get your hands on both books and allow Lucas and Jacqueline's stories to sweep you away.

I cried buckets at the end so be warned that you will definitely need a box of tissues to hand.  You will also need to clear your weekend and forget any plans you were going to make.  Believe me when I say that reading 'Breakable' is the best way you could possibly spend your Saturday.  Tammara Webber continues to astound me with her beautiful stories.  Originally a self-published phenomenon, I'm so glad that her novels have now found a wider audience and I look forward to joining her on the next stage of her writing journey.
Posted by Samantha (A Dream of Books) at 00:00