Cuckoo Song by Frances Hardinge, published by Macmillan Children's Books on 8th May 2014

Goodreads synopsis:
When Triss wakes up after an accident, she knows that something is very wrong. She is insatiably hungry; her sister seems scared of her and her parents whisper behind closed doors. She looks through her diary to try to remember, but the pages have been ripped out. Soon Triss discovers that what happened to her is more strange and terrible than she could ever have imagined, and that she is quite literally not herself. In a quest find the truth she must travel into the terrifying Underbelly of the city to meet a twisted architect who has dark designs on her family - before it's too late... 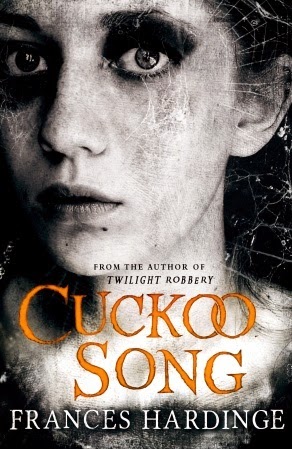 Review:
This is the second book I've read by Frances Hardinge, after 'A Face Like Glass' which I adored.  Although I didn't enjoy this one quite as much, there is no doubt that Hardinge really knows how to craft a story which immerses you completely within it's pages and which whisks you away from reality.

'Cuckoo Song' is a creepy fantasy about Triss, who's not Triss.  She wakes up after an accident with strange longings and cravings.  She knows who she is but at the same time she doesn't.  She recognises her mother, father and younger sister Pen, but the latter seems to look at her with true hatred and Triss can't understand why nothing feels quite as it should.  As the story progresses, it twists and turns deeper into the fantasy realm where the truth about what really happened to Triss is stranger than anything I could have ever imagined.

Family is an important theme in the book.  After the death of their son during the war, Triss's mother and father want to keep her at home, safe with them, but their behaviour is suffocating.  Triss can't grow up while they are constantly fussing over her and trying to stop her from going to school or having any friends.  Their attention is poisonous without them even realising it.  The relationship between Triss and her sister Pen was one of my favourite things about the book.  It starts off fractured and almost broken but things change for both of them and they begin to gain a better understanding of one another.

The story is a delicious blend of magic and fantasy which will entrance readers as they follow Triss on a journey of self-discovery and reconciliation.  Although not my favourite of Hardinge's books, I was still in awe of the unique and original plot which kept me glued to the pages.
Posted by Samantha (A Dream of Books) at 00:00