Run by Gregg Olson, published by Hot Key Books on 1st May 2014

Goodreads synopsis:
What if you discovered that everything you thought you knew about yourself was a lie?

Rylee is fifteen. She comes home from school one afternoon to find the most shocking thing possible - her father dead, with a knife through his heart, and a key clutched in his hand. Her mother's purse is on the counter, but she appears to be long gone. A message in blood is written on the floor... RUN.

With her brother in tow, Rylee begins a dark journey, one that will uncover horrific and chilling crimes and lead her to an unexpected and gruesome discovery about her real father and what - or who - is behind his insatiable desire to kill. By the journey's end Rylee's childhood is a long way behind her... 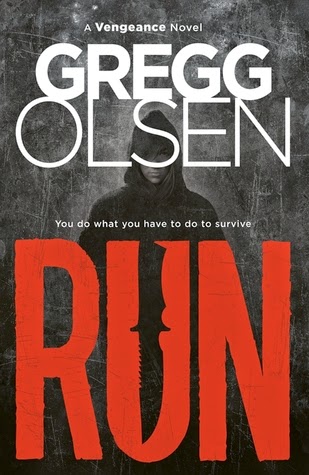 Review:
Fast-paced, bloody and unflinchingly brutal, 'Run' is a book you will not be able to put down.  It is a scary and terrifying suspense thriller which will keep you on your toes the whole way through.

Rylee and her younger brother Hayden go on the run after their father is murdered and their mother disappears.  They have been trained for this but nothing could have prepared Rylee for the truth she is about to discover.  A truth which will change her whole life forever.  I had my theories at the start about Rylee and her family and why they had moved so many times and assumed different identities but I was so wide of the mark that my original thoughts seem ridiculous now.  The actual reason behind it all was utterly terrifying and shocking and very, very scary.

As I was reading 'Run', half of me didn't want to know what was going to happen next and the other half of me was impatient to tear through the story and see what lay in store for Rylee.  She is a pretty spectacular main character.  She is strong, courageous, determined and resourceful and she is brilliantly depicted as a whirlwind force of nature that has one goal in sight - to get her mother back.  I was gripped by her journey and the way in which she refused to back down or give up, even when she was confronted by some horrible revelations.  I enjoyed following her as she put all the clues together and came up with some clever ways of tracking her mother down.

The content of the story is extremely hard-hitting and there are some disturbing scenes in the book which I wouldn't recommend for younger readers.  The ending in particular is full on and although it is brilliantly truthful to Rylee's character, did cause my jaw to drop big time.  I may even have wanted to hide behind the sofa at times!

Gregg Olsen has written an incredible book and never once takes his foot off of the gas.  'Run' is the first in his Vengeance series, which will be followed soon by 'Hunt'.  I can't even begin to imagine what lies in wait for Rylee next but I'm eager to follow her as she takes her next steps.