The Sin Eater's Daughter by Melinda Salisbury, published by Scholastic on 5th February 2015

Goodreads synopsis:
Seventeen-year-old Twylla lives in the castle. But although she’s engaged to the prince, Twylla isn’t exactly a member of the court.  She’s the executioner.

As the Goddess embodied, Twylla instantly kills anyone she touches. Each month she’s taken to the prison and forced to lay her hands on those accused of treason. No one will ever love a girl with murder in her veins. Even the prince, whose royal blood supposedly makes him immune to Twylla’s fatal touch, avoids her company.

But then a new guard arrives, a boy whose easy smile belies his deadly swordsmanship. And unlike the others, he’s able to look past Twylla’s executioner robes and see the girl, not the Goddess. Yet Twylla’s been promised to the prince, and knows what happens to people who cross the queen. 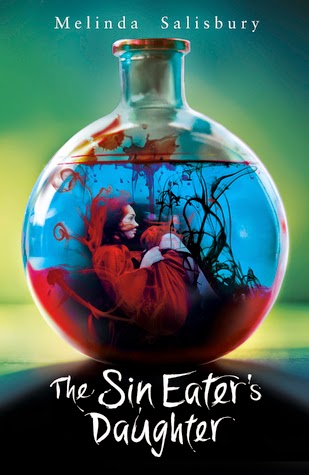 Review:
'The Sin Eater's Daughter' is a glorious fantasy drama that will enchant you and leave you wanting more.  This fabulous debut from UK author Melinda Salisbury, starts strongly and goes from strength to strength as the story builds up the tension between the characters and the political intrigue played out behind the scenes of the Royal Court.

Twylla, the main character, is blessed in the eyes of the Gods.  However, she feels more cursed than blessed, with a deadly touch that can kill a man or woman.  Used by the Queen as a Royal assassin, she has almost become resigned to her life, until she meets Lief, who is tasked with guarding her safety.  He opens her eyes to the truths that she cannot or does not want to see.

There are so many things to love about this book.  I enjoyed the first person narrative immensely.  Twylla is an extremely likeable character who is put in an unenviable position.  Her narrative felt like she was talking directly to me and I empathised with many of the difficult choices she has to make.  She undergoes quite a personal transformation and by the end of the story she is a changed person.

Yes, there is a love triangle of sorts but it's brilliantly written and left me constantly changing my mind about who I wanted Twylla to choose.  I wasn't expecting to like both male leads as much as I did, even though they both have secrets to hide.

The ending was totally unexpected and made me rethink my thoughts about some of the characters.  I didn't see it coming at all which is a tribute to Melinda Salisbury's captivating and amazing storytelling skills.

There's only one thing I want to know now.  Is there going to be a sequel and if so, when can I get my hands on it!