Goodreads synopsis:
In one fell swoop, Maddie loses her boyfriend (her decision) and her job (so not her decision). But rather than drowning her sorrows in bags of potato chips, Maddie leaves L.A. to claim the inheritance left by her free-spirited mother-a ramshackle inn nestled in the little coastal town of Lucky Harbor, Washington.

Starting over won't be easy. Yet Maddie sees the potential for a new home and a new career-if only she can convince her two half-sisters to join her in the adventure. But convincing Tara and Chloe will be difficult because the inn needs a big makeover too.

The contractor Maddie hires is a tall, dark-haired hottie whose eyes-and mouth-are making it hard for her to remember that she's sworn off men. Even harder will be Maddie's struggles to overcome the past, though she's about to discover that there's no better place to call home than Lucky Harbor. 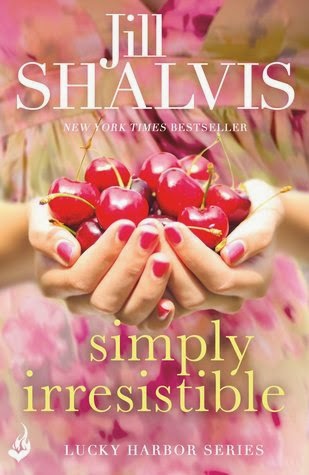 Review:
This is the first book in the Lucky Harbor series by Jill Shalvis and the first one by this author that I've read.  Her writing reminded me of Lisa Kleypass and I will definitely be seeking out more of her back catalogue of titles.

'Simply Irresistible' is about three sisters that are left a small beach side inn by their late mother in the town of Lucky Harbor. The story centres around the middle sister, Maddie, who after losing her job and ditching her boyfriend, desperately wants to make the inn her new home.  When she meets gorgeous local guy Jax, she has another very good reason to want to stay.

Maddie is a great character.  She has let herself be walked over in her life but she is determined to become more assertive and stand up for herself.  She is incredible likeable and I loved her slightly up and down sibling relationship with her half-sisters Tara and Chloe.  They all have extremely different personalities but their strengths and weaknesses complement each other.  As they begin to bond, you have no doubt that they would do anything to support one another.

Sexy Jax is enough to turn anyone's head!  He and Maddie together make a great couple.  I loved the way he had to work to win over her trust and her heart.  Particularly knowing the way she had been hurt in the past.  There are some steamy moments between them but on the whole it is more about the wooing and the romance.

Lucky Harbor is like my dream coastal town.  It is exactly the sort of place that I would like to live in.  By the sea, simple and uncomplicated and where everyone in the small community looks out for each other.

A sweet, sexy and romantic read, this is the perfect book to settle down with on a warm summer's night.  I'm going to be picking up the second in the series 'The Sweetest Thing' about the oldest sister Tara immediately and then I will be searching out all of Jill Shalvis's other books too.  A delightful read!
Posted by Samantha (A Dream of Books) at 00:00