The Novice by Taran Matharu, published by Hodder Children's Books on 5th May 2015

Goodreads synopsis:
When blacksmith apprentice Fletcher discovers that he has the ability to summon demons from another world, he travels to Adept Military Academy. There the gifted are trained in the art of summoning. Fletcher is put through grueling training as a battlemage to fight in the Hominum Empire’s war against orcs. He must tread carefully while training alongside children of powerful nobles. The power hungry, those seeking alliances, and the fear of betrayal surround him. Fletcher finds himself caught in the middle of powerful forces, with only his demon Ignatius for help.

As the pieces on the board maneuver for supremacy, Fletcher must decide where his loyalties lie. The fate of an empire is in his hands. 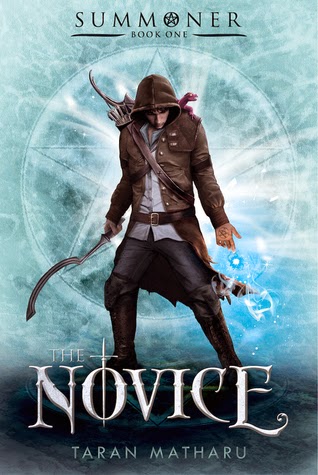 Review:
'The Novice' is the first book in the Summoner series and was a Wattpad sensation before it hit the shelves in print.  Taran Matharu's debut takes the reader on a fantastical journey in a world unlike anything you've seen before.  The characters are placed in dangerous life or death situations as the horror of war looms ever on the horizon.

The story is about an orphan boy called Fletcher who discovers that he can summon demons.  He ends up going to train at the Vocans Academy where he prepares for his role in the fight to defeat the orcs in battle.  A large portion of the book follows Fletcher as he practices his new-found skills with demon Ignatius.  When the two are working in sync, they have the ability to do incredible things.  The demons reminded me a little of those in Philip Pullman's Dark Materials trilogy, as they become in tune with their owners' emotions.  I've also heard them compared to Pokémon and actually they did remind me of this, because each demon has it's own animal characteristics and performs to a different level.

I really enjoyed watching the students train in the art of summoning.  This makes up the biggest part of the story and delves in-depth into the training process.  It was a bit drawn out and I felt like it slowed the pace of the plot down a little but at the same time it helped to draw me into Fletcher's world and gave me a better understanding of the demons themselves.

There's a fantastic and diverse range of characters in the book, including Othello the dwarf and Sylva the elf.  It was fun getting to know them all.  Fletcher's friends help to teach the value of friendship and the importance of making bonds which aren't based on class divides.

'The Novice' was a brilliant fantasy read where adventure always seems to be waiting on the horizon.  It was a really promising start to the series and if the second book is equally, if not more exciting, then I'll be very happy.
Posted by Samantha (A Dream of Books) at 00:00