But when disaster strikes and Caroline is killed on a rescue mission, 16-year-old Ben is determined to continue her work with the Gemini Force team. As Ben fights to earn his place, can he prove he has what it takes to face dangerous situations and save lives? 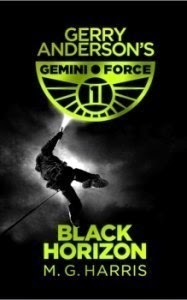 Review:
This is the first book in the Gemini Force 1 series, written by M.G. Harris from an original idea by Gerry Anderson, creator of Thunderbirds.  The story is about teenager Ben Carrington, who as the start of the book is mourning the loss of his father in a tragic mountaineering accident.  His mother, also a top climber, decides to team up with Jason Truby, a wealthy entrepreneur who has set up a top secret rescue squad organisation called Gemini Force.  Ben desperately wants to become part of the team but first he has to prove himself.

The opening of the book throws the reader right into the action as a dangerous situation develops involving Ben and his mother.  This sets the tone for the rest of the story which is packed full of thrilling danger and adventure.  'Black Horizon' was a great read because I love books which are about teenagers doing incredible things and exhibiting amazing levels of bravery and this fit the bill perfectly.  I don't think it was as engaging as some other series I've read in the same vein but I liked the concept and I think it has a lot of potential to get better and better.

So what would I like to see more of?  The character of Ben could be developed and polished.  He does have to deal with some really tough situations in the book, as well as several personal tragedies, but I didn't warm to him as much as I was expecting to.  He is obviously used to getting his own way and that's one of the things that made me think of him as a bit spoilt.  I would also love to see more of some of the other characters who were a bit one-dimensional.  Plus, the action could be ramped up another notch and the boundaries pushed a little more.

I do like the fact that this book was originally made possible because of a kickstarter campaign by Gerry Anderson fans.  That's the power of readers for you!

The second book will be published later this year and will be called 'Ghost Mine'.
Posted by Samantha (A Dream of Books) at 00:00