As White As Snow by Salla Simukka, published by Hot Key Books on 5th March 2015

Goodreads synopsis:
Three and a half months have passed since Lumikki Andersson was left for dead in a snowdrift - a bullet wound in her thigh and frostbite creeping into her skin. But the scorchingly hot streets of Prague in summer provide a welcome contrast to that terrifying time, and now Lumikki just wants to move on - forget the events of the past year, forget about the Polar Bear's crime ring - and escape her parent's oppressive concern... She's alone again, which is just how she likes it.

But Lumikki's peaceful solitude is about to be shattered. She is approached on the street by a nervous young woman, who, unbelievably, thinks she might be Lumikki's long-lost sister. Lumikki is unconvinced - although Zelenka's story seems to ring horrifyingly true - but there's something weird about her. Something jumpy, and suspicious. 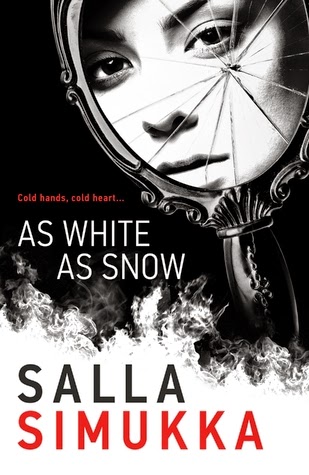 Review:
'As White As Snow' has been translated from the Finnish by Owen F. Witesman.  It is the second book in the series about Lumikki Anderson and is set in Prague during the summer.  After the events of the previous book, Lumikki is trying to find freedom and solitude, but she finds her plans interrupted when she is drawn into a dangerous situation involving a woman claiming to be her long-lost sister.

This was a fabulously thrilling read!  I'm a huge fan of these books and although I didn't think this instalment quite reached the heady heights of 'As Red As Blood', it was still brilliant and full of suspense.  A lot more is revealed about Lumikki herself and some of the secrets to do with her personal life, which were only hinted at before, were gradually revealed.  If possible, these made me like her even more.  She is what makes this series so darn good.  I love the fact that she's very resourceful and genuinely likes her own company and spending time on her own.  It's refreshing to see a character who is more of an introvert and doesn't crave the company of a crowd of people.  There's something very appealing about her which draws the reader in and makes you want to discover more about her.

The plot wasn't particularly complex and I grasped what was going on quite quickly but there was one twist which I didn't guess until the very end.  I like seeing how she gets out of some frankly quite dangerous situations and how her wits and intelligence are the things which help her save the day.

Tense and exciting, I loved the climax of the book which was brilliantly executed.  It's left me with more questions which I hope will get answered in the third book in the series which will be called 'As Black As Ebony'.  Fingers crossed, the truth about Lumikki's family will finally be revealed.