Goodreads synopsis:
Katy knows the world changed the night the Luxen came.  She can't believe Daemon welcomed his race or stood by as his kind threatened to obliterate every last human and hybrid on Earth. But the lines between good and bad have blurred, and love has become an emotion that could destroy her—could destroy them all.

Daemon will do anything to save those he loves, even if it means betrayal.

They must team with an unlikely enemy if there is any chance of surviving the invasion. But when it quickly becomes impossible to tell friend from foe, and the world is crumbling around them, they may lose everything— even what they cherish most—to ensure the survival of their friends…and mankind.  War has come to Earth. And no matter the outcome, the future will never be the same for those left standing. 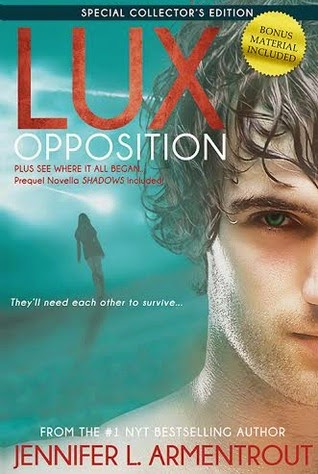 Review:
I am madly in love with this series and so, so sad that 'Opposition' is the final instalment.  Katy and Daemon are one of my all-time favourite book couples and I was dying to find out how things were going to end for them but sad to say goodbye to all the characters that I love.

Now that the Luxen have arrived on earth, humans are in danger of being completely taken over and obliterated by them.  With both Katy and Daemon's lives hanging in the balance, as well as those of their friends and families, they may have to give up everything they hold dear to survive.

This is an explosive and exhilarating conclusion to the series.  Everything is laid on the table as friends and foes have to join together to protect the human race.  It was an exciting read the whole way through and I was on the edge of my seat from the start.

As well as tons of great action scenes, let's not forget the toe-tingling moments between Katy and Daemon.  Fans of the couple will not be disappointed.  Jennifer L. Armentrout always writes the best romantic scenes between the two and I think she's saved the best for last here.  If it wasn't already apparent, these two absolutely can't live without each other.  They have gone through so much but have one last, final hurdle to face before they can be together properly without endless threats hanging over their heads.

A simply stunning read which beautifully concludes Katy and Daemon's journey and provides a fitting and well executed end to the series.  I will admit however, that I won't give up hope that Armentrout might revisit the pair in the future.