The Return by Jennifer L. Armentrout, published by Hodder on 26th February 2015

Goodreads synopsis:
It’s been a year since Seth made the deal with the gods that pledged his life to them. And so far, the jobs they’ve given him have been violent and bloody–which is kind of all right with him. But now Apollo has something else in mind for Seth. He’s got to play protector while keeping his hands and fingers off, and for someone who really has a problem with restraint, this new assignment might be the most challenging yet.

Josie has no idea what this crazy hot guy’s deal might be, but it’s a good bet that his arrival means the new life she started after leaving home is about to be thrown into an Olympian-sized blender turned up to puree. Either Josie is going insane or a nightmare straight out of ancient myth is gunning for her.

But it might be the unlikely attraction simmering between her and the golden-eyed, secret-keeping Seth that may prove to be the most dangerous thing of all. 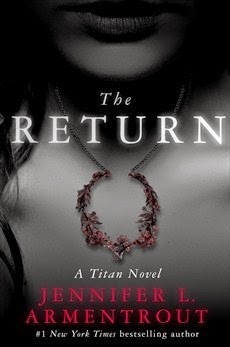 Review:
Jennifer L. Armentrout is one of the authors on my auto-buy list.  I love her books and her characters and I adore the way she continually creates these super-hot romances which practically make the pages sizzle.  'The Return' was fantastic and has given me a new book guy to swoon over!

Readers of the Covenant series will be familiar with the character of Seth.  He finally gets his own story in 'The Return' and if you weren't his no. 1 fan before, you will be after reading this one.  I guarantee it.  He wasn't perhaps the most likeable character in the Covenant books but I began to see him in a whole new light and I really liked the person he developed into.  So for the record, phwoar!  Seth is super sexy and will definitely set female readers hearts aflutter.

This is a new-adult book, so there are some weak at the knees, tongue hanging out of you mouth moments.  I loved it!  Don't get me wrong, the story was fabulous too but Seth without a shirt?  Everyone needs more of that in their lives.

At the beginning of the story, he is sent to protect a girl who is off-limits to him.  However, Josie turns out to be no ordinary girl and sparks immediately begin to fly between them.  The dual perspective meant that I was able to get inside both of their heads and understand more about them.  I liked Josie instantly and I was intrigued about her role as she is extremely central to everything that happens.  She has a great connection with Seth and I enjoyed seeing this grew throughout the book.

Exciting action, a heart stopping romance and plenty of moments of drama and adventure, 'The Return' was a winner for me.  I want more and I want it now!