Review: An Ember in the Ashes - Sabaa Tahir

An Ember in the Ashes by Sabaa Tahir, published by HarperCollins on 4th June 2015

Goodreads synopsis:
For years Laia has lived in fear. Fear of the Empire, fear of the Martials, fear of truly living at all. Born as a Scholar, she’s never had much of a choice. For Elias it’s the opposite. He has seen too much on his path to becoming a Mask, one of the Empire’s elite soldiers. With the Masks’ help the Empire has conquered a continent and enslaved thousands, all in the name of power.

When Laia’s brother is taken she must force herself to help the Resistance, the only people who have a chance of saving him. She must spy on the Commandant, ruthless overseer of Blackcliff Academy. Blackcliff is the training ground for Masks and the very place that Elias is planning to escape. If he succeeds, he will be named deserter. If found, the punishment will be death.

But once Laia and Elias meet, they will find that their destinies are intertwined and that their choices will change the fate of the Empire itself. 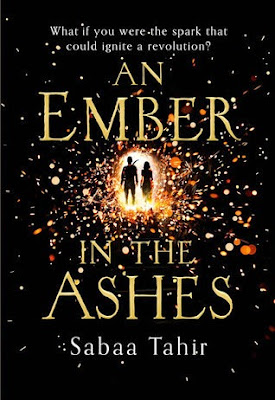 Review:
I'd heard a lot of pre-publication buzz about 'An Ember in the Ashes' which piqued my interest enough to make me bump this title up to the top of my 'must read' list.  It sounded like everything I look for in a book and I'd already read a lot of glowing reviews.  This was a book, therefore, that I was expecting to grab me by the scruff of my neck and not let go.  It didn't quite do that however and turned out to be more of a slow burner.  A book which started dramatically in the first few chapters, and then simmered away until it exploded into technicolour.  To be honest, I'm not really sure why I wasn't instantly hooked but I think perhaps the amount of world-building at the start, slowed down the overall pace of the story and meant that I was concentrating so hard on understanding all the details of the characters' world that I failed to sit back and enjoy the bigger picture.  That is until suddenly everything clicked into place and I was forcibly sucked into the story.

Readers are going to love the two main characters, Elias and Laia.  They have had two very different upbringings and live in opposing worlds but they are unwittingly brought together by a dangerous chain of events.  Laia is desperate to help her brother and Elias longs to scape his life at Blackcliff - a life of brutality, punishment and death.  The narrative perspective alternates between the two of them.  I particularly enjoyed reading Elias's side of the story because I was fascinated by Blackcliff and couldn't wait to find out more about it.

I absolutely adored Elias's friendship with Helene and I won't lie - I was secretly hoping that there might be more than just friendship between them.  There are a lot of ups and downs for the two best friends to face and believe me, you will never guess the direction in which Sabaa Tahir takes their relationship.  I think it adds an incredibly interesting dynamic to the story.

Sabaa Tahir really takes you deep into the world that these characters inhabit.  Her writing is wonderfully rich and captivating and she certainly knows how to leave readers wanting more!

As I was reading this book, I could easily see it adapting well to the big screen.  I'm already casting actors in my head for all the main parts.

After a slightly shaky start, this turned out to be a brilliant read which left me hanging on a thread at the end.  I'm dying for the sequel and I can't wait to discover what trials lie in wait for Elias and Laia next.
Posted by Samantha (A Dream of Books) at 00:00