Promtastic by Liz Elwes, published by Scholastic on 4th June 2015

Goodreads synopsis:
Five girls. One night. Everyone wants Prom to be perfect, but things don't always go as planned. Grace was meant to be Prom Queen, so why is someone else wearing her crown? Kristyn is desperate for her crush to notice her so how far will she go to get his attention? Leigh and the rest of the Prom committee have been planning this night for months, but will Leigh even make it in time for the final dance? Charlotte never wanted to go to Prom at all, but can she resist an invitation from a mystery boy? Alex has had a crush on Chris all year. Will this be the night that her dreams come true, or will her prom end in tears? 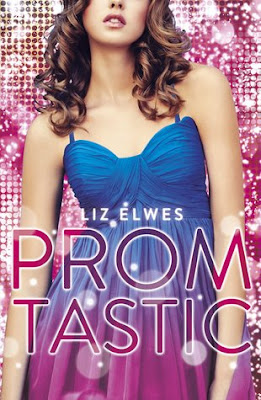 Review:
'Promtastic' is the first book I've read by Liz Elwes, an author who I'll admit I actually hadn't heard of before.  I was attracted by the pretty, sparkly cover and I was in the mood for something light and frothy.  This sounded like it would fit the bill perfectly.

The story centres around a group of five girls all going to Prom.  The opening few chapters give a glimpse of them at their Prom, putting each of them in a difficult situation, before leaving you to guess what will happen next, as the timeline jumps back to the day before the big event.

I initially found the narrative a bit jerky at the start, as it flitted between Alex, Leigh, Charlotte, Grace and Kristyn.  I'm not a huge fan of multiple narrators but I tried not to let this put me off.  The girls' names are listed at the top of each chapter which definitely helped and as their individual personalities and characters began to come across, I got more absorbed into their stories.

I liked Charlotte's story the most and I also thought that Grace's was really good.  Her 'boyfriend' Evan is hiding a big secret from the world and has drawn Grace into helping him keep it from his friends and family.  I wasn't quite so keen on some of the other girls storylines.  Nothing seemed to go to plan for them as they try to unravel things for themselves.

This was a quick, fun contemporary read which I think slightly younger readers will enjoy.  I think Prom is a very American concept and we certainly didn't have anything like this when I was young but I guess a lot of teenagers now will identify with pinning all your hopes on one big night to celebrate the end of your school days.

There are some fun quizzes and prom tips at the end of the book which are a nice additional touch.