Review: In Another Life - Laura Jarratt

In Another Life by Laura Jarratt, published by Electric Monkey on 4th June 2015

Goodreads synopsis:
American sisters Hannah and Jenny Tooley have spent their lives dreaming of flying to the UK and visiting all the places their English mother has told them about. But Jenny’s dream turns to a nightmare when she vanishes without a trace.

Hannah and her father arrive in England to a big police investigation. As Hannah gets to know some of Jenny’s friends and acquaintances, she realises that her sister is up to her neck in something – and the mysterious text messages she’s receiving bear this out. She is particularly drawn to Harry and, against her better judgement, begins to fall in love. 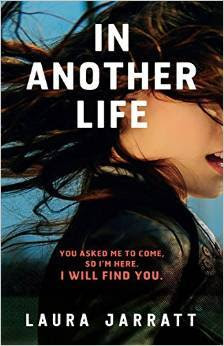 Review:
I raced through this book in a couple of hours.  The story is so gripping that I felt myself pulled along by my intrigue behind the disappearance of Hannah's older sister Jenny.  I have read all of Laura Jarratt's previous books and I think this one might be my favourite so far.

Hannah and her father arrive in England to help with the investigation into Jenny's disappearance.  Hannah is determined to find out what really happened to her beloved sister and begins to try to piece together Jenny's movements with the help of her employers and friends.  As she begins to get to know the people that saw her sister last, she finds herself falling for local boy Harry who she finds herself unwittingly drawn towards.

This was a fantastic thriller.  I am usually really good at guessing all the twists and turns and I will often pick out the guilty party after the first few chapters, but I was totally wrong-footed this time.  I did have my suspicions and I thought I'd worked out what Laura Jarratt was up to with the plot but I was headed down a blind alley.  She brilliantly surprised me with a shocking and frankly quite chilling plot twist that turned everything on it's head.

The story combined drama, deception and romance and will keep readers on their toes as they try to discover not only the truth about Jenny but also the threat that hangs over Hannah's head.  I wouldn't hesitate to recommend this book to fans of this genre.