Goodreads synopsis:
Tuesday Cooper is happy being normal -doing her a-levels and indulging in her twin obsessions: buying weird vintage clothes in charity shops and writing her beloved music blog (which nobody ever reads). Her love for music started when she was thirteen and had a massive crush on Jackson Griffith, teen rock god and SUPER HOT LOVE OF HER LIFE. Now Tuesday's eighteen and has moved on to fancying boys in real life and Jackson went off the celebrity radar years ago.

So it can't be him that's messaging her on her blog, can it? 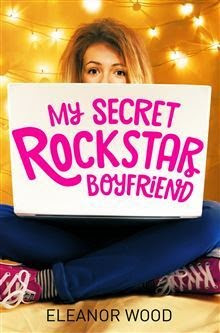 Review:
'My Secret Rockstar Boyfriend' is about larger than life Tuesday Cooper who writes a music blog and is obsessed with buying vintage clothing. Through her blog, she comes into contact with rockstar Jackson Griffith and suddenly finds herself with an invite to Glastonbury which lands her at the centre of a media storm.

This was a very funny and entertaining read.  It's based on author Eleanor Wood's own experiences and captures the authenticity of a teenager getting the chance to meet someone famous in real life.  Tuesday is an extremely unique character and came across as likeable and fun, although she also has a more serious side and isn't really into drinking and clubbing like a lot of other people her age.  She's actually quite mature and ditching everything to meet Jackson Griffith is pretty out of character for her.

I liked Tuesday's relationship with her Mum, who treats her more like her equal than as her daughter.  They are incredibly close as Tuesday's Dad is not in the picture.  This has meant that they have been used to just having each other to rely on.  By the end of the book, they have had to adapt their roles which was interesting to see.

This was a quick read which I finished in a couple of hours.  I think readers will definitely warm to Tuesday and will identify with several elements of the story, especially the lure of meeting your favourite celebrity and what happens when the bubble bursts.
Posted by Samantha (A Dream of Books) at 00:00