Review: All Of This Is True - Lygia Day Penaflor

All Of This Is True by Lygia Day Penaflor, published by Bloomsbury on 31st May 2018

Goodreads synopsis:
Miri Tan loved the book Undertow like it was a living being. So when she and her friends went to a book signing to meet the author, Fatima Ro, they concocted a plan to get close to her, even if her friends won’t admit it now. As for Jonah, well—Miri knows none of that was Fatima’s fault.

Penny Panzarella was more than the materialistic party girl everyone at the Graham School thought she was. She desperately wanted Fatima Ro to see that, and she saw her chance when Fatima asked the girls to be transparent with her. If only she’d known what would happen when Fatima learned Jonah’s secret. If only she’d known that the line between fiction and truth was more complicated than any of them imagined. 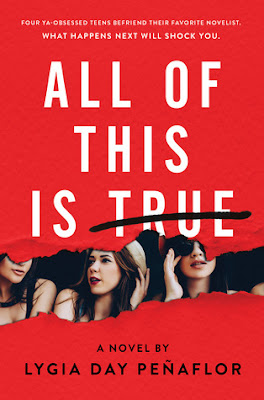 Review:
This is a hard review to write because I found 'All of This is True' to be quite a strange book.  I'd heard lots of good things about it prior to starting it and I was expecting suspense, intrigue, excitement and a twist to end all twists but...I didn't get any of that.  I read about a third of it and then briefly stopped to review what had actually happened so far and it wasn't much at all!  I wasn't sure where the shocks and spills were going to come so I carried on and yet I still didn't understand what was so puzzling about it.  Now to me, there was a very small, teeny tiny twist in the plot but I thought it was so obvious that I can't understand how anyone could be fooled by it.

The story centres around four teenagers, Miri, Soleil, Jonah and Penny, plus author Fatima Ro. They all came across privileged teens with too much time on their hands and with more money than sense. I didn't like any of them and they came across as just a bunch of rich kids, wasting their time on foolish and trivial pursuits.

I also didn't enjoy the format of the book which was pretty unusual and felt jarring and disjointed. It takes the form of interviews, diary entries, magazine articles and excerpts from a novel.  The unique narrative meant that I never felt that I could get fully absorbed into the story and that, combined with shallow characters, really put me off.

I found the ending a complete disappointment and the whole novel slow and uninspiring.  Not for me I'm afraid.