Review: Not If I Save You First - Ally Carter

Not If I Save You First by Ally Carter, published by Orchard Books on 27th March 2018

Goodreads synopsis:
After Maddie's Secret Service dad takes a bullet for the president, he takes Maddie somewhere he thinks they'll be safe - far away from the White House and the president's son, Logan. 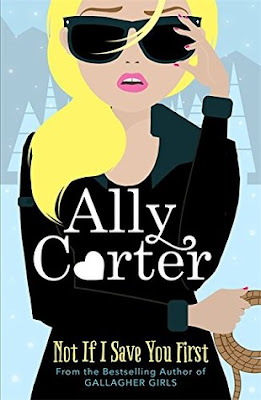 Review:
Ally Carter is one of my go-to authors when I want to read something that is pure escapism and a whole lot of fun.  I have adored all of her books and 'Not If I Save You First' may just be my new favourite.  I devoured it in one sitting and loved absolutely everything about it.  If I didn't have a humongous toppling to-be-read pile, then I would probably immediately begin reading it all over again.  Trust me, it's that good.

This book literally had everything I love and more.  Features a member of the Presidential First Family, tick.  Set in the Alaskan wilderness, tick.  A kick-ass teenage heroine, tick. A life and death situation, tick.  It's like Ally Carter reached inside my brain, scooped out all of my favourite things and put them into her story.  I could not have enjoyed this book any more if I'd tried.

The opening couple of chapters are set in the White House and set up the scenario which unfolds throughout the rest of the book.  The action then jumps forward six years and we see our protagonist Maddie, living with her father, formerly the President's bodyguard, in the middle of Alaska.  Maddie used to be best-friends with the President's son Logan, but that's before he never answered any of her letters and she lost all contact with him.  She's never forgotten him though and when he reappears in her life after so many years, she doesn't know whether to be happy or angry. And when he ends up getting kidnapped, it's up to Maddie to rescue him and keep them both alive.

I absolutely adored Maddie.  She came across like a female Bear Grylls.  Her father (and Alaska) have taught her how to survive and so she's not afraid to go after the kidnapper when he disappears with Logan.  She's constantly two steps ahead and is not to be messed with.  I thought her relationship with Logan was adorable, although she spends most of the book pretending to hate him!

Featuring tons of action and adventure, I never wanted the story to end.  I was constantly kept on my toes and the excitement just kept on coming.  One of the best books I've read so far this year.  Ally Carter has most definitely done it again!
Posted by Samantha (A Dream of Books) at 00:00