Night of the Party by Tracey Mathias, published by Scholastic on 3rd May 2018

Goodreads synopsis:
After withdrawing from the EU, Britain is governed by The Party, and everyone born outside the country is subject to immediate arrest and deportation. Failing to report illegals is a crime.

Zara is the only one who knows her friend Sophie died. But Zara's an illegal.

She can't tell anyone her secrets. Not even Ash, the boy she loves. The boy who needs to know the truth.

As the country prepares for an election, Zara must make an impossible choice. 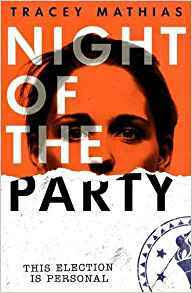 Review:
'Night of the Party' is written by UK debut author Tracey Matthias.  It imagines a post-Brexit Britain where the governing party have introduced a new policy dictating that only those British Born or BB as they are known, have the right to live in Britain.  Everyone else is treated as an illegal and subject to immediate deportation.  It's a frightening look at a post-Brexit world where peoples' human rights are threatened and where suspicion is rife.  People are expected to automatically report anyone they know or suspect to be an illegal, leading to an atmosphere of fear and suspicion among communities.

The story focuses on two characters who meet at the beginning.  They are 'illegal' Zara and British born Ash.  They find themselves on opposite sides of the citizenship debate, although they are also linked in a way that Ash doesn't realise about until part way through the story.  Nevertheless they form a powerful bond which goes beyond nationality and bridges issues of love and family.

What I thought was particularly interesting about this book was that the scenario created by Tracey Matthias isn't completely impossible or as far removed from reality as you would think.  The author herself states that it started out as a 'what if' political dystopia but shifted worryingly close to real life.  The novel actually presents a political situation that could very well end up becoming true at some point in the future and that's an incredibly scary thought.

I have to admit that this isn't normally the type of book that I would choose to pick up and at times I found the story quite slow.  However, it was a thought-provoking read which definitely made me think about aspects of politics that I hadn't considered before.