The Smoke Thieves by Sally Green, published by Penguin on 3rd May 2018

Goodreads synopsis:
A princess, a traitor, a hunter and a thief. Four teenagers with the fate of the world in their hands. Four nations destined for conflict.

In Brigant, Princess Catherine prepares for a loveless political marriage arranged by her brutal and ambitious father. In Calidor, downtrodden servant March seeks revenge on the prince who betrayed his people. In Pitoria, feckless Edyon steals cheap baubles for cheaper thrills as he drifts from town to town. And in the barren northern territories, thirteen-year-old Tash is running for her life as she plays bait for the gruff demon hunter Gravell.

As alliances shift and shatter, and old certainties are overturned, our four heroes find their past lives transformed and their futures inextricably linked by the unpredictable tides of magic and war. Who will rise and who will fall? And who will claim the ultimate prize? 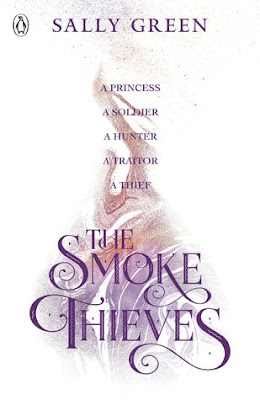 Review:
'The Smoke Thieves' is the first book in Sally Green's new fantasy series, falling on from the success of her Half Blood trilogy. When I read the synopsis, I thought it sounded quite similar to Morgan Rhodes Falling Kingdoms series which I love, so I was really looking forward to reading it.  I'm always on the lookout for new YA fantasy novels, as I enjoy this genre a lot which meant that my hopes were quite high for this title.

The story is told from the perspective of five very different characters.  I have to say that my biggest issue with this book was the fact that the multiple character narration made it quite difficult to follow at times and some people were definitely more interesting than others.  My favourites were Princess Catherine and Tash who were both strong, female characters and although their situations in life made them polar opposites, they were intriguing and enjoyable to read about.  Unfortunately I wasn't as keen on some of the others, such as servant March, student Edyon and traitor Ambrose. I found myself getting impatient with their chapters and sneaking a peak ahead so I could see when the story was going to switch back to the females. I also found their stories slightly disjointed. Although I'm sure they will converge more as the series progresses, it was initially hard to see how they were all related to each other.

The plot was slow to unfold and there were times when nothing really seemed to happen, which meant that it failed to hold my attention throughout. There are some exciting moments where the suspense just starts to build up and then it falls flat again.  This may be partly because Sally Green has to do a lot of world and character building in this opening instalment but I would have liked to have seen more action to keep me engaged.

The ending definitely picked up and the story did finish on a high but I hope that there's more for the reader to get their teeth into in the follow-up.