Goodreads synopsis:
Nine of us came here. We look like you. We talk like you. We live among you. But we are not you. We can do things you dream of doing. We have powers you dream of having. We are stronger and faster than anything you have ever seen. We are the superheroes you worship in movies and comic books—but we are real.

Our plan was to grow, and train, and become strong, and become one, and fight them. But they found us and started hunting us first. Now all of us are running. Spending our lives in shadows, in places where no one would look, blending in. we have lived among you without you knowing.

They caught Number One in Malaysia.
Number Two in England.
And Number Three in Kenya.
They killed them all.

I am Number Four. 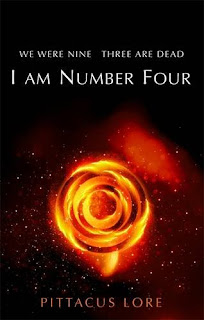 When I first heard about this book it was described as basically being a story about an alien invasion.  If that’s enough to put you off wanting to read ‘I Am Number Four’, then don’t let it because this book is about so much more.  It’s about being the newcomer in a small town and trying to fit in, it’s about the bond between fathers and sons, it’s about those pangs of first love and it’s about growing-up and discovering who you are and who you want to be.

John Smith is not your average teenager.  He's actually an alien from the planet Lorien, sent to earth, along with eight others, to be protected against attack from the evil Mogadorians.  The Mogadorians (who are crazy scary!) are intent on tracking down the nine escapees and killing them, although they can only be killed in the correct order.  3 have been dealt with already and number four (John) is next.

This is not your typical sci-fi fare.  'I Am Number Four' makes a cracking good read, which I thoroughly enjoyed.  The first half of the book is about introducing the characters and developing the emotional attachment between them and the reader.  The second half picks up the pace nicely and I found myself turning pages ever more rapidly to find out what was going to happen next.  I was rooting for John and his friends and I think my knuckles turned white from gripping the book so tightly!  The story ends leaving you wanting more, which is why 'The Power of Six' (book 2 in the Lorien Legacy) has swiftly shot to the top of my wishlist.

I can easily see why this has already been optioned for a major movie adaptation.  I can't wait to see who they're going to cast as John.  The story just leaps off the page and you can see it clearly happening right in front of your eyes.  I would heartily recommend this book to anyone.  I loved it!
Posted by Samantha (A Dream of Books) at 10:33