Goodreads synopsis:
In the wake of her father’s death, Ash is left at the mercy of her cruel stepmother. Consumed with grief, her only joy comes by the light of the dying hearth fire, re-reading the fairy tales her mother once told her. In her dreams, someday the fairies will steal her away, as they are said to do. When she meets the dark and dangerous fairy Sidhean, she believes that her wish may be granted.

The day that Ash meets Kaisa, the King’s Huntress, her heart begins to change. Instead of chasing fairies, Ash learns to hunt with Kaisa. Though their friendship is as delicate as a new bloom, it reawakens Ash’s capacity for love—and her desire to live. But Sidhean has already claimed Ash for his own, and she must make a choice between fairy tale dreams and true love. 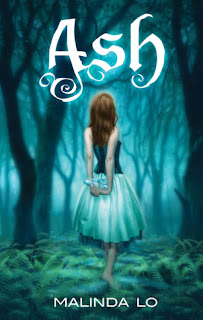 Review:
Ash is a beautifully reimagined take on the classic Cinderella fairytale. I had heard so many amazing things about this book from other bloggers that I couldn’t wait to read it and for the most part I wasn’t disappointed. I love books that incorporate fairytales and twist them around to create something new and in ‘Ash’ this was done in such a clever and inventive way. I’ll probably never read Cinderella in the same way again!!

I thought that the pacing of the book could have been a little better.  I felt that the second half was better than the first. This was mainly because the narrative in the first part seemed a little drawn out and I was expecting more to happen, whereas the latter part focused on the relationships between the characters and the action really seemed to kick-off, so it gripped my attention more.  I think that's the only criticism I could have of it though!

Malinda Lo’s writing is gorgeously eloquent, weaving cautionary tales throughout, which instead of being distracting, added so much more depth to the book. It was almost like stories within a story.

She has another book on the way, ‘The Huntress’, which I’m looking forward to reading next.  I believe it picks up where Ash left off, but it's not out until 2011.
Posted by Samantha (A Dream of Books) at 10:46