Goodreads synopsis:
Seventeen-year-old Louisa Cosgrove longs to break free from her respectable life as a Victorian doctor's daughter. But her dreams become a nightmare when Louisa is sent to Wildthorn Hall: labeled a lunatic, deprived of her liberty and even her real name. As she unravels the betrayals that led to her incarceration, she realizes there are many kinds of prison. She must be honest with herself - and others - in order to be set free. And love may be the key... 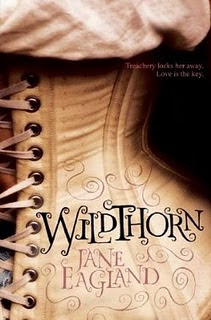 Review:
What attracted me to this book originally was the lovely cover!  I hadn't heard of Jane Eagland before but the cover and the intriguing blurb was enough to get me picking this one up to buy.  I love trying out new authors.  The book is inspired by the stories of the women incarcerated in asylums in the nineteenth century.  As the latter is one of my favourite time-periods, I definitely had to read this.

Louisa Cosgrove is thrown into Wildthorn Hall after an accusation of lunacy.  Imprisoned in an asylum for the insane, she has to unravel the secret of the person responsible for her incarceration, whilst also finding a means of escape and a new path for her future.

I absolutely adored this book! Each chapter alternated between Louisa's present day predicament and her recollections of growing up.  This leads the reader with her on a journey towards discovering the acts that lead to her imprisonment.  I thought that this was a really clever way of narrating the story, because like Louisa, the reader has to only guess at why she's ended up in Wildthorn Hall and share her confusion over the behaviour of the people from her past.  When everything is finally revealed it's a shock to all parties.

The book had wonderful characterizations throughout and an extremely likable heroine.  It had an intriguing and gripping plot and has introduced me to a fantastic new author who I am definitely going to keep an eye on.  It actually reminded me a little bit of 'Fingersmith' by Sarah Waters but for young adults, mixed-in with 'The Woman in White' by Wilkie Collins, for the overall gothic feel of the story.

The ending, in my opinion, was perfect, although I would love to read more about Louisa and find out what happens to her next.  I think Jane Eagland should write a sequel!

If you have read this and enjoyed it, like me, you will probably want to read Jane Eagland's second YA novel, 'Whisper My Name', which is luckily out now.
Posted by Samantha (A Dream of Books) at 04:50