Goodreads synopsis:
When Ginny receives thirteen little blue envelopes and instructions to buy a plane ticket to London, she knows something exciting is going to happen. What Ginny doesn't know is that she will have the adventure of her life and it will change her in more ways than one. Life and love are waiting for her across the Atlantic, and the thirteen little blue envelopes are the key to finding them in this funny, romantic, heartbreaking novel. 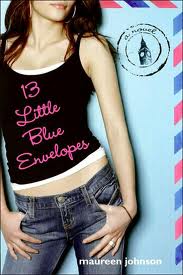 Review:
’13 Little Blue Envelopes’ follows the journey of Ginny, as she globe-trots her way around the world according to the instructions, left in a series of 13 letters, by her deceased aunt.  Her travelling adventure takes Ginny on a trip of self-discovery, opening her eyes to new experiences, emotions and people.  It’s also an opportunity for her to let her hair down for once and just have fun!

This wasn’t a stand-out book but I still enjoyed it.  I’m not a traveller myself so I had the pleasure of living vicariously through Ginny instead!  It was a quick read (I finished it in one evening) and would probably appeal to a slightly younger teen audience.  I liked the way that by the end of the book Ginny had become more self-assured and confident (but I reckon she was pretty confident to start with to go gallavanting around Europe on her own).  It did surprise me a little bit that Ginny’s mother would let her go alone, without any idea of where she was going to end up, but maybe that's just me.

There are certain aspects of the story that I would have liked to have seen developed further and a bit like Ginny's journey I felt it was all rather a whirlwind at time, skimming the surface without digging deeper into the story itself.  However, I loved reading about all the places she visited...I only wish I was as brave as her!
I haven’t read anything by Maureen Johnson before but I'm now interested enough to try some of her other books now.  I've heard that 'Girl at Sea' is very good and of course there's going to be a follow-up to '13 Little Blue Envelopes', so I shall be looking out for that too.
Posted by Samantha (A Dream of Books) at 12:38