Goodreads synopsis:
Fifteen-year-old Eve Evergold is cute, sassy and enjoying a busy social life. What she doesn't know yet is that someone close to her is an evil demon that only she has the supernatural power to defeat. She needs to work out who it is - and fast! Because although there's something very attractive about the dark side...dating a demon? Pure hell! 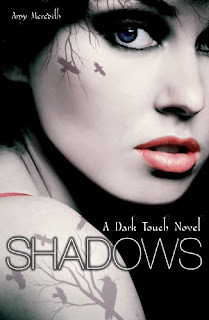 Review:
I thought that this book was a really promising start to the series.  Basically, the premise is that demons have arrived in the small town of Deepdene where our heroine Eve lives and goes to school.  Local legend says that only the Deepdene witch is capable of ridding them from the town once and for all, but in the meantime the residents are starting to see strange shadows and gradually seem to be losing their minds.

I think the Dark Touch series is aimed at a slightly younger teen audience.  It's quite a slim novel and I read it easily in one evening.  The story is entertaining and fans of the supernatural will love it, but I would have liked to have seen a little more backstory to some of the characters.  Things happened very quickly in the book and although there were some interesting twists and turns, most were predictable and I could see coming a mile off..

Overall, I did enjoy it though and I really liked the relationship between Eve and her best friend Jess, although their obsession with fancy designer clothes takes shopping to a whole new level (!).

This is the first book in the series, which is followed by #2 The Hunt and #3 Fever.  I'm interested to see where Amy Meredith's going to take the story next and I'll be sticking along for the ride :)
Posted by Samantha (A Dream of Books) at 11:25