Goodreads synopsis:
I have two weeks. You'll shoot me at the end no matter what I do.

That's what you do to enemy agents. It's what we do to enemy agents. But I look at all the dark and twisted roads ahead and cooperation is the easy way out. Possibly the only way out for a girl caught red-handed doing dirty work like mine - and I will do anything, anything, to avoid SS-Hauptsturmführer von Linden interrogating me again.

He has said that I can have as much paper as I need. All I have to do is cough up everything I can remember about the British War Effort. And I'm going to. But the story of how I came to be here starts with my friend Maddie. She is the pilot who flew me into France - an Allied Invasion of Two.

We are a sensational team. 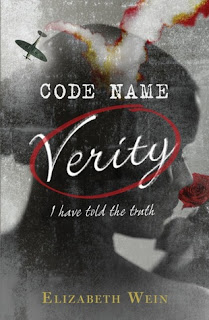 Review:
This book is set during one of my favourite periods of history to read about - the Second World War, and the backdrop to the story alternates between England and Occupied France.  It's a story about the true heroism of men and women during the war, often risking their own lives for the good of the war effort.  It's about the strength and courage that ordinary people show during a time of need.  Be prepared to sob your heart out in places.  I certainly did.

'Code Name Verity' follows the story of two girls, a spy and a pilot, who become best friends as they each do their part for their country.  I found the narrative in the first half of the book sometimes slightly confusing as we see things from the viewpoint of one of the girls who has been captured and is being interrogated in a German prisoner of war camp, tortured by the Gestapo for information.  She tells the story of herself and Maddie but talks about herself in the third person.  I thought this worked well within the particular context because she uses it as a distancing device, but it meant that I really had to concentrate on what was happening and who was narrating the story.  The second half of the book picks up with Maddie herself looking back at events and that's when I found a lot of plot points started to slot into place.

I loved the friendship between the two girls but I also liked them as two individual personalities who are often very different but absolutely loyal to each other  Although at the start, you're never quite sure if our captured girl can really be trusted, as she begins telling her account of things to the Germans, be prepared for some pretty surprising moments along the way which shed new light on many of the events of the story.

The book in itself is also a fascinating account of the Air Transport Auxiliary with lots of interesting details about the planes which were used during the War.  However, it occasionally felt like Wein got a bit too immersed in all the aircraft history rather than concentrating on the real heart of the story.

I think 'Code Name Verity' would appeal both to fans of young adult fiction, as well as having crossover appeal for adults who are interested in this period of history.