The Broken Road by B.R. Collins, published by Bloomsbury on 16th February 2012

Goodreads synopsis:
Rufus is an apprentice in his father's goldsmith workshop in Cologne. He is one of many who fall under the spell of Nick, a charismatic preacher whose promise to lead a journey to the Holy Land is mesmerising. Mesmerising enough for hundreds to leave family and safety and follow him. But despite Nick's charisma, he is flawed, and the crusade that Rufus embarks upon with so many others turns, terribly, into a journey of failed dreams and broken promises. 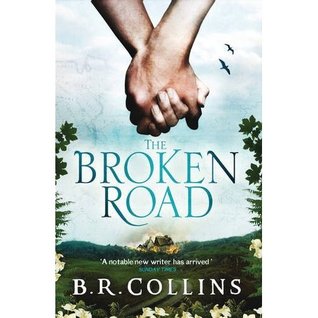 Review:
'The Broken Road' is set in 1212 and is a fascinating take on the Children's Crusade  which involved a band of children setting out on their own to try to rid the Holy Land of Muslims.  There are various accounts of what actually happened but B.R. Collins has chosen to concentrate on the Crusade from Cologne to Genoa and then Rome.

The book reminded me slightly of 'Crusade' by Linda Press Wulf, which is also an interpretation of the journey but which focused on the more well known version of events with the children eventually being sold into slavery.  It's incredible to imagine all these young children and teenagers setting out on such a long journey where death and hardship is waiting around every corner and so it was interesting to read such a captivating account of an event which robbed mothers and fathers of their offspring.

The story focuses on Rufus, who is a likable and appealing narrator.  He tries to do what he believes in but he also always tries to do what is right.  He's captivated from the start by the charismatic Nick, who leads the group on the road to Jerusalem.  Nick believes in the Crusade but is often blind to much of what's happening around him and doesn't notice the horror of children dying along the way and many having to be left behind because they're too weak to walk any further.  These are children who are starving, thirsty and exhausted at an age when they should be at home with their parents.  I thought that Collins perfectly captured the excitement and exhilaration they experience when they initially get a taste of real freedom for the first time and then the reality that gradually begins to permeate their consciousness when their siblings and friends begin dying.

God is another major character in the book and I thought it was a unique idea to introduce him through Rufus's eyes and as a real and substantial character in his own right.  There's a religious and spiritual theme present throughout the whole story and blind faith plays an enormous part in the actions of many of the children.

'The Broken Road' will appeal enormously to fans of historical fiction and is both an informative and enjoyable read.  I look forward to reading more by the British author B.R. Collins in the future.
Posted by Samantha (A Dream of Books) at 00:00