The One Dollar Horse by Lauren St John, published by Orion Children's Books on 1st March 2012

Goodreads synopsis:
Fifteen year old Casey Blue lives in East London’s grimmest tower block and volunteers at a local riding school, but her dream is to win the world’s greatest Three Day Event: the Badminton Horse Trials. When she rescues a starving, half-wild horse, she’s convinced that the impossible can be made possible. But she has reckoned without the consequences of her father’s criminal record, or the distraction of a boy with melty, dark eyes, with whom she refuses to fall in love. Casey learns the hard way that no matter how high you jump, or how fast you gallop, you can never outrun the past. 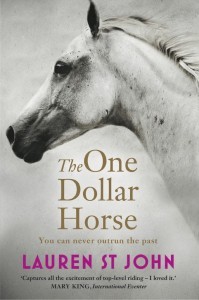 Review:
Horse mad children and teens will love this story about a young girl who rescues a horse from the knacker's yard and then goes on to ride him in the Badminton Horse Trials, the world's greatest three day event.  They will also love the gorgeous hardcover copy with shocking pink edged pages.  This book practically begs you to pick it up!

Casey Blue loves horses.  After she saves Storm Warning from near death, a bond is formed between horse and girl that nothing can break.  Casey has had a tough life after her father was sent to prison for his part in a burglary but she's determined and has a dream that she'll do anything to reach.

When I was younger I used to love reading books about horses.  I was a huge fan of The Saddle Club series by Bonnie Bryant and was always on the lookout for new titles.  This book brought back many happy memories of my horse-mad days and I'm sure will be well loved by today's audience.  I really liked the main character Casey and enjoyed the way the book explored her relationship with her father, as well as the romance which develops between her and the Farrier's son Peter, who notices something different and special about her from the moment he first sets eyes on her.

Lauren St John has really managed to capture the love of horses that many of the characters share and the excitement of competing on one of the greatest stages of them all.  It was extremely enjoyable watching Casey overcoming so much adversity and so many obstacles and the book makes you believe that anything is possible and that dreams really can come true.

The second book in the trilogy entitled 'Race the Wind' will be published in March 2013 and follows Casey on the next step of her adventure.
Posted by Samantha (A Dream of Books) at 00:00