Reached by Ally Condie, published by Penguin on 30th November 2012

Goodreads synopsis:
After leaving Society and desperately searching for the Rising—and each other—Cassia and Ky have found what they were looking for, but at the cost of losing each other yet again: Cassia has been assigned to work for the Rising from within Society, while Ky has been stationed outside its borders. But nothing is as predicted, and all too soon the veil lifts and things shift once again. 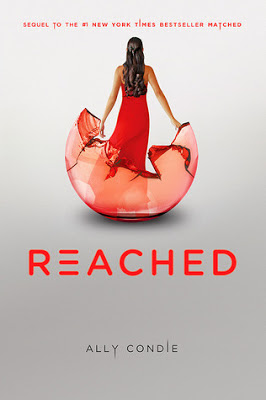 Review:
'Reached' is the third and concluding part of Ally Condie's incredible trilogy.  My expectations were high as I loved the previous two books and couldn't wait to see how the story of Cassia, Xander and Ky was going to be wrapped up.  I was also excited to see which boy Cassia would finally commit her heart to as the love triangle between the three main characters has lain at the heart of much of the books.

Firstly, 'Reached' is a big book at 512 pages long.  I have to say that at times I almost felt that it was too long and too drawn out.  A large part of the story deals with a plague which hits society but although this was in itself interesting, I think so much attention was given to this one single element that other aspects of the story suffered.  At certain points in the book it really felt like not much was actually happening.  As I've come to expect from Condie, her character development is extraordinary but I would have liked to have seen a little less of this in the final instalment of the series and instead more of a focus on wrapping up all the threads of the plot.

I thoroughly enjoyed the fact that the story combines three separate viewpoints; those of Cassia, Xander and Ky.  It was lovely to finally get to hear from Xander in particular as he has always been my favourite character in the series.  I learnt a lot more about him as a person, his feelings and aspirations and by the end I felt I could understand where he was coming from and what he hoped for the future.  Each characters' voice is distinctive and well written and this meant that I was never confused about who was telling what part of the story.

If I'd had a little more time, I would probably have gone back and reread the other two books in the series first before starting this one.  Because the release dates have been a year apart, I couldn't remember as many details as I would have liked and I think it would be interesting to read the whole trilogy in one continuous flow.

Although I did think that the pace of the story was extremely slow, I loved the ending of the book.  The series has always been about the struggle for freedom and the right for the individual to choose and make decisions for oneself.  Ally Condie has always stayed true to this message and 'Reached' exemplifies this with the characters all choosing the path which they must walk.

The concluding instalment may not have been quite what I was expecting from the finale of this tremendous series but after having invested so much in the incredible world that Condie has invented, along with her wonderful characters, it was great to finally see how the story concluded.  I hope to read much more by this hugely talented author in the future.