Goodreads synopsis:
Daire Santos has already saved her grandmother's life and her soul. But at a cost: the Richter family has been let loose in the Lowerworld. Daire and her boyfriend Dace Richter must work together to find them before chaos ensues and the balance between good and evil is destroyed. As their relationship deepens, Dace's evil brother Cade grows stronger than ever, building his power and forcing Daire and Dace to confront the horrifying prophecy that has brought them all together. It will leave Daire no choice but to claim her true destiny as Seeker, but only by making an unthinkable sacrifice. 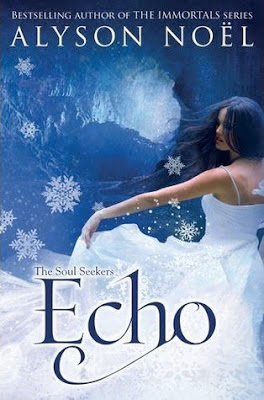 Review:
'Echo' is the second book in Alyson Noel's Soul Seekers series.  After being sucked in by the gorgeous cover, I loved catching up with Daire and Dace and their lives in the small town of Enchantment.  Although I enjoyed 'Fated' which was the first instalment, I did think it suffered quite a lot because it had to set up so much of the story, as well as the spiritual aspects that I got bogged down in so much detail without really learning as much about the characters as I would have liked.  This time around the plot is infinitely better and the pace really picks up.  The characters' world has now been established so Noel can concentrate on placing her protagonists in difficult and often dangerous situations and seeing how they fare.

The story focuses on Daire and Dace's determination to rid the Lowerworld of the Richters. They will do almost anything to protect the other but Cade stands between them and Daire learns a shocking truth about him which will shake the foundations of their relationship.  Daire's role as Seeker is explored in more depth and I loved all the spiritual details that Noel manages to combine into the story.  I found all the bits about animal spirit guides really interesting.

I felt like I grew to understand a lot more about Daire, her destiny and her relationship with Dace.  In the first book I thought Dace was very underdeveloped and I didn't completely buy into their connection.  This time around with the narrative being shared between them, I began to see the spark they share and the chemistry that's always bubbling away whenever they are anywhere near each other.  There's a wonderful scene in the latter half of the book which speaks volumes about their love and which gave me a definite warm melting feeling inside!

Along with all the characters from 'Fated', a new face is introduced, Phyre.  She seems to be hiding a lot of secrets and I'm looking forward to finding out more about how she fits into everything and the role she will play.

If you love romance, mysticism and adventure then this is definitely the book for you.  A brilliant read, the ending was incredible and I can't believe I've now got to wait until July 2013 for the next in the series 'Mystic'.
Posted by Samantha (A Dream of Books) at 00:00