Dance of Shadows by Yelena Black, published by Bloomsbury on 14th February 2013

Goodreads synopsis:
Dancing with someone is an act of trust. Elegant and intimate; you're close enough to kiss, close enough to feel your partner's heartbeat. But for Vanessa, dance is deadly – and she must be very careful who she trusts . . .

Vanessa Adler attends an elite ballet school – the same one her older sister, Margaret, attended before she disappeared. Vanessa feels she can never live up to her sister's shining reputation. But Vanessa, with her glorious red hair and fair skin, has a kind of power when she dances – she loses herself in the music, breathes different air, and the world around her turns to flames . . .

Soon she attracts the attention of three men: gorgeous Zep, mysterious Josh, and the great, enigmatic choreographer Josef Zhalkovsky. When Josef asks Vanessa to dance the lead in the Firebird, she has little idea of the danger that lies ahead – and the burning forces about to be unleashed. 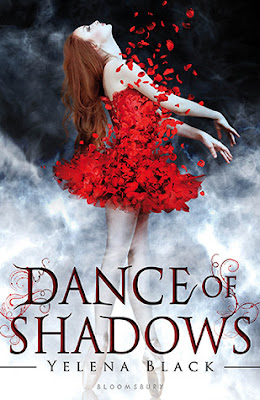 Review:
'Dance of Shadows' has one of the most beautiful covers I have ever seen!  It is so gorgeous that I knew I had to read this book as soon as possible.  I love the image of the ballerina and the choice of colours and it works so well with the story's concept.  I'm looking forward to seeing what the publishers come up with for the rest of the series because this is a book which begs to be read.

I'm a huge ballet fan but there just don't seem to be enough books being written about this subject.  In the past year I've enjoyed 'Bunheads' by Sophie Flack and had been hoping for more in this vein.  'Dance of Shadows' is unique because it combines a main character with a love of dance, along with a deliciously dark demonic element, tapping into the paranormal genre which is huge at the moment.

The story opens with Vanessa starting at the New York Ballet Academy.  The same Academy where her older sister Margaret went missing.  She is determined to find out what happened to Margaret but someone at the school has other plans for her.  The third person narrative still allowed me to connect with Vanessa as a main character and I really grew to like her.

I adored the setting for the story.  Yelena Black captured perfectly the blood, sweat and tears that individuals have to go through to try and become top ballet dancers.  A lot of hard work and determination is needed, the latter a quality which Vanessa has in spades.  I enjoyed the fact that the ballet side was mixed with the paranormal to create a thrilling mystery.  I wasn't sure who could be trusted or what was going on, so when everything was finally revealed it was a very big surprise.

There's romance running through the story too, with Vanessa attracted to the gorgeous Zep but also strangely drawn to the mysterious and enigmatic Justin.  I like the way that neither boy is really who he first seems and there are hidden layers to everyone in the book.  The romance never overpowered the main plot but gradually developed throughout the story and it was interesting to see how different Vanessa's relationships with the two boys was.

There were a lot of twists in the second half of the book which kept me glued to the pages and the ending suggests that the sequel will be equally gripping and intriguing.

This is a sublime story about the art of dance where life and death matters are brought to the fore in a thrilling, dark and mysterious way.
Posted by Samantha (A Dream of Books) at 00:00