Reason to Breathe by Rebecca Donovan, published by Penguin on 17th January 2013

In a town where most people worry about what to be seen in and who to be seen with, Emma Thomas would rather not be seen at all. She's more concerned with feigning perfection, pulling down her sleeves to conceal the bruises. Emma doesn't want anyone to know how far from perfect her life truly is.

When Emma unexpectedly finds love, it challenges her to recognize her own worth - but at the risk of revealing the terrible secret she's desperate to hide. 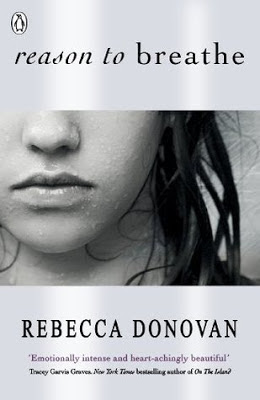 Review:
'Reason to Breathe' is not an easy read.  Dealing with the subject of abuse, it is hard-hitting, powerful and emotional and often had me in tears.  I had to put the book down several times because I was so moved and upset by what happened to Emma, but ultimately it was a story that I needed to finish.  I was nervous about starting this title because I normally avoid subjects like this which are likely to rip your heart out and stomp all over it.  However, I'd heard such good things about it from fellow readers that there was never any doubt in my mind that I wanted to pick it up.  I'm so very glad I did because it is a tremendous book and has left me on tenterhooks for the next in the series.

I've been reading quite a few New Adult books lately and this is definitely the one that has moved me the most.  The story centres around teenager Emma, a high-flying overachiever who gets top grades, is best friends with the most popular girl in school, editor of the school newspaper and star player on various sports teams.  She seems to have it all but is hiding a terrible secret which she will go to any lengths to protect.  Her secret is threatened when she begins to lower her defences to let new guy Evan into her life.  He makes her feel things she's never experienced before and his pursuit of her shows his obvious attraction.  Emma wants to be with him but fears letting him get too close to her dysfunctional family life.

Rebecca Donovan drew me into Emma's struggle from the very first chapter.  I because so immersed in the story that I felt like I experienced with her all the highs and lows that she went through.  Part of me understood Emma's reasons for protecting her secret but the other half of me didn't and desperately wanted her or Sara, her best friend, to tell an adult what was going on.  I wanted Emma to find happiness and security and to have everything that most other normal teenagers have.  Instead of worrying about parties and fashion, she's concerned with how she's going to cover up her numerous bruises and what she'll tell the people who ask how she got them.

Evan was a breath of fresh air in both the story and in Emma's life.  He's interested in her from the start and wants them to be more than just good friends.  He shows her what happiness feels like and is very protective of her which I loved.  He provides her with the opportunity to escape some of the day to day horrors she is faced with and provides a real shoulder for her to lean on.  Although she won't tell him what is really going on, he begins to piece things together and offers her a way to escape.

The character of the abuser is a malicious presence in the book.  Every time she appeared in the story I was nervous about the horror she was going inflict upon Emma.  Ultimately, I hope that she is punished for her actions but that remains to be seen.  It really made me shiver when even her name was mentioned and I abhorred the way she treated Emma.

I cannot recommend this book enough.   Although at times it is hard to read and was quite upsetting in places, I found it stuck with me long after finishing it and I'm desperate to know how the story will continue in the sequel, 'Barely Breathing'.
Posted by Samantha (A Dream of Books) at 00:00