Easy by Tammara Webber, published by Penguin on 3rd January 2013

Goodreads synopsis:
Jacqueline seems to have a knack for making the wrong choices. She followed her boyfriend to his choice of university, disregarding her preference. Then he dumped her. She chose a minor she thought she could combine with her music studies, but she's falling behind. And then, leaving a party alone one night, she is attacked. If it wasn't for the timely intervention of a stranger, she would have been raped. Now she must make a choice - give up and give in, or toughen up and fight on. Only the support of the man who is tutoring her and the allure of the guy who saved her from the attack convince her that it's worth fighting on. Will Jacqueline now have to make a choice between them too? And can she make the right decision? It's not easy . . . 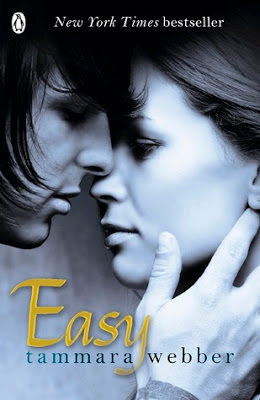 Review:
'Easy' is an amazing book which made me laugh, smile and cry.  I could hardly see the words on the page at the end because I was crying so much.  An emotional and heart stopping read, it exceeded all of my expectations and was impossible to put down.

Tammara Webber hasn't shied away from dealing with some quite heavy subjects, the main one being rape and a woman's right to say no.  The story starts with the main character Jacqueline being assaulted and nearly raped in a campus car park and this sets up her first meeting with the man that rescued her, Lucas.  I wasn't prepared for the book to launch so quickly into such a difficult scene to read, but I applaud Webber for writing so brilliantly and sensitively about a topic such as this.

As Jacqueline begins to come to terms with what happened to her, she is also getting over her break-up with her boyfriend Kennedy, as well as being attracted to Lucas and craving to know more about him.  I liked Jacqueline a lot and warmed to her more as the story progressed.  I thought she might not be able to deal with things after the attack but she proves to be a strong person who still gets on with her life.  She enrols in self-defence classes with her friend Erin and takes steps to ensure that she never feels that vulnerable again.

I loved her developing relationship with Lucas, who happens to be both hot and mysterious.  He doesn't reveal a huge amount about himself and is very guarded when it comes to his personal life but Jacqueline always feels safe around him and he is incredibly gentle with her.  I'm not normally a fan of tattoos, piercings and long hair but for Lucas I was willing to make the exception!  There are some great moments between the two of them as their romance blossoms and they each begin to open up with the other person and express their true feelings.

The ending was totally gut wrenching and really made me cry but it was brilliantly written and fitted perfectly with the story. I loved 'Easy' and can't wait to read more by such a talented author.
Posted by Samantha (A Dream of Books) at 00:00