Goodreads synopsis:
Beau Vincent is rude, bad, and dangerous to know. So why can't good girl Ashton Gray keep away from him? She already has the perfect boyfriend - her town's local Prince Charming, Sawyer Vincent. But Sawyer is away for the summer, and in the meantime Ashton is bored, and the heat between her and Beau is undeniable - as well as irresistible. Ashton is about to unleash her bad girl - but what will she do when Sawyer comes home? And how will Sawyer react when he returns to find his girlfriend in the arms of his best friend - and cousin? 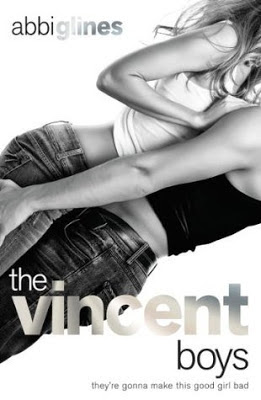 Review:
It may only be January but 'The Vincent Boys' is the hottest book of 2013.  If you're trying to banish those winter blues then I would recommend picking up this title immediately.  Already a hugely successful e-book, it is finally available in print fomat in the UK and is set to get readers pretty hot under the collar.  There's been a huge amount of buzz around this book and I've read lots of glowing reviews from fellow bloggers, so I had it on pre-order and as soon as it arrived I couldn't wait to start reading.

The story centres around preacher's daughter Ashton, whose boyfriend Sawyer has gone out of town for part of the summer.  In his absence Ash starts getting close to Beau, who a long time ago was her childhood best friend but who also happens to be Sawyer's cousin.  I absolutely adored Beau from the start!  His southern mannerisms and the way he's so protective and caring toward Ash, plus of course that bad boy exterior, made me fall for him completely.  He's strong and tough and not the type of person you would want to get on the wrong side of, but when he is around Ash he turns into the sweetest guy and it was obvious from the start that he cared deeply about her.  I loved the fact that he really found it hard to control himself when they are together but he tries to do so anyway to protect her.

I would perhaps have liked to have seen Ash stand up for herself a little more throughout the book, rather than wait for either Beau or Sawyer to defend her, but she appears quite low on self-esteem.  Because of this, I enjoyed the fact that she gradually began to become her own person rather than the being someone that everyone else thought she should be.  By the end of the book she's undergone quite a transformation.

If you like a good romance, then you will love 'The Vincent Boys' which gets pretty steamy at times.  This book falls into the New Adult genre which has taken the book world by storm and therefore includes a lot more sexual content and swearing.  Personally, I found this refreshing and realistic and a nice change from stories which tend to shy away from this.

I was totally hooked on both of the delicious Vincent boys and am dying for more!  This title had everything I want and look for in a book and I can't wait to read it again.  Next up, is 'The Vincent Brothers' which is set to focus on Sawyer and Ashton's cousin Lana.