Goodreads synopsis:
When Mia's grandfather disappears, Mia and her mother immediately rush down to stay with her grandmother and offer support. With no friends and no internet access in the little seaside village where her grandparents live, Mia is bored and lonely--until she makes friends with Dee, the daughter of a fisherman from a nearby island, and Peter, who is on holiday with his parents. But Mia's grandad is still missing, and actually meeting face to face with Dee is proving surprisingly difficult. Mia becomes determined to find out what's going on, but the truth is much more mysterious than she ever imagined... 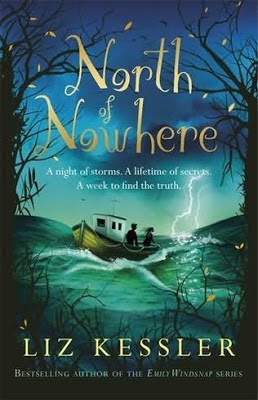 Review:
I haven't read anything by Liz Kessler before but when this beautiful little hardback book arrived, I couldn't wait to start reading it.  I'm always looking for new British authors to try and I'm pleased to say that after thoroughly enjoying 'North of Nowhere', I'll definitely be hunting down some of Kessler's other books.

Set in the small fishing village of Porthaven, Mia and her mother arrive to stay with Mia's Gran after her Grandad mysteriously disappears.  Initially friendless and unhappy, Mia eventually makes friends with a girl called Dee who she hasn't met in person but communicates with through Dee's diary.

The story is unpredictable and changeable like the seas that surround Porthaven.  Things aren't always as they first appear and to a degree you need to suspense your disbelief, particularly near the end when things take an unexpectedd turn.  There's an element of magic about the book which I loved and I thought it wa beautifully written.

Infinitely intriguing, I was hooked by 'North of Nowhere' and impressed by the very clever conclusion of the story which didn't disappoint in the slightest with it's imaginative ending.  I had no idea what was going to happen and although not everything was explained this didn't matter in the slightest.

I was intrigued to read that the story was actually inspired by the real village of Hallsands in South Devon which collapsed into the sea.  Due to terrible gales and high tides, only one house remained habitable in the village.  It's terrible to think of people losing their homes and the hardship and heartache they must have gone through.

'North of Nowhere' is the perfect book to read on a stormy night, curled up indoors with the fire crackling.  I was gripped by Mia's story and the mystery of Luffsands.  This was a truly magical and captivating read which I will definitely be recommending to everyone I know.
Posted by Samantha (A Dream of Books) at 00:00