The Holders by Julianna Scott, published by Strange Chemistry on 5th March 2013

Goodreads synopsis:
17-year-old Becca spent her whole life protecting her brother from, well, everything. The abandonment of their father, the so called 'experts' who insist that voices in his head are unnatural and must be dealt with, and the constant threat of being taken away to some hospital and studied like an animal. When two representatives appear claiming to have the answers to Ryland's perceived problem, Becca doesn't buy it for one second. That is until they seem to know things about Ryland and about Becca and Ryland's family, that forces Becca to concede that there may be more to these people than meets the eye. Though still highly skeptical, Becca agrees to do what's best for Ryland.

What they find at St. Brigid's is a world beyond their imagination. Little by little they piece together the information of their family's heritage, their estranged Father, and the legend of the Holder race that decrees Ryland is the one they've been waiting for. However, they are all--especially Becca--in for a surprise that will change what they thought they knew about themselves and their kind. 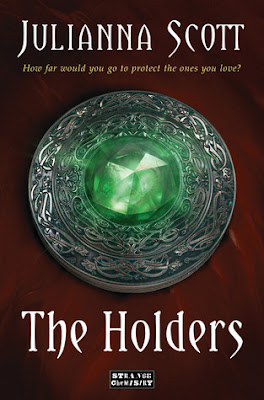 Review:
I was looking forward to reading this book as the premise sounded very intriguing.  However, I'll admit that I was a little worried that it was going to veer too much into fantasy for my tastes, so I started it with some trepidation.  Turns out that I needn't have worried at all because 'The Holders' was right up my street!  It had a gripping plot, plenty of exciting twists and turns and some pretty fantastic characters which all combined to keep me glued to the pages.

The main protagonist Becca, accompanies her younger brother Ryland to his new school, St. Brigids in Ireland.  Her brother has always been a bit different and she has always been used to looking after him but once at the school, she discovers the truth about Ryland's ability to hear voices, as well as some unexpected revelations about herself.  I thought that the idea of people having special abilities was executed brilliantly and I couldn't wait to find out what each person's gift was.  Their history was also fascinating and kept me interested even when there was on occasion quite a lot of information to absorb.

One of my favourite things about this book was the connections between many of the characters.  I loved the protective streak that Becca has towards the people she cares about and the way she is fiercely loyal and defensive about them, especially where her brother is concerned.   However, what truly made 'The Holders' for me was the bond which develops between Becca and Alex.  I could immediately believe in the feelings which they have for each other and I couldn't wait for all of their scenes together.  There are so many great moments, including lots of romantic sparks that I was rooting for them the whole way through.

The story was fast-paced and the pages simply flew by.  The setting of the book was fantastic and I almost wish that I could have attended a school like St Brigids.  It seemed wonderful and had a very homey and welcoming atmosphere about it.  There was lots to keep the reader absorbed and I didn't want it to end.  It completely exceeded any expectations I had at the start and I wouldn't hesitate to recommend it to other readers.  I desperately want a sequel to the book now!
Posted by Samantha (A Dream of Books) at 00:00