Goodreads synopsis:
Furious and depressed, Jane is released from an institution for a rare visit to her family. But Jane has an escape plan. On the flight, she is going to take a lethal dose of pills and end her pain forever. But the plane never reaches its destination. Jane wakes up amidst piles of wreckage and charred bodies on a snowy mountaintop. There is only one other survivor: a boy named Paul. What starts out as a death mission quickly becomes a fight for life as the two struggle through snowstorms and starvation. 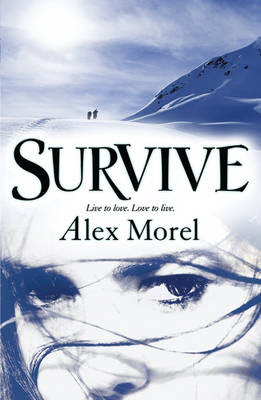 Review:
'Survive' by Alex Morel had an intriguing premise which caught my attention as soon as I heard about it. The plot concerns a teenage girl, who on the flight home to her family plans to commit suicide, until the plane she is on crashes. She decides that she wants to live after all but has to try to survive in the wilderness and make it back alive. This sounded exactly like my kind of book and for the most part I enjoyed it but there were one of two things that prevented me absolutely loving it.

I have to admit that I wasn’t too keen on the main character Jane. I found it hard to connect with someone so intent on taking their own life and I didn’t really feel like I ever got to understand her fully. I did enjoy the fact that she learns a lot of life lessons throughout the book though and begins to value the life she has rather than being intent on throwing it all away. I thought the connection with her father was dealt with well but I would have liked to have been made to care more about her throughout the story, as well as perhaps being presented with more of her back story.

The section of the book dealing with Jane and Paul surviving on a snowy mountaintop was brilliant and fascinating. I love survival shows so this definitely piqued me interest and kept me glued to the pages. This part of the story is rich with vivid images and descriptions of knawing hunger, unquenchable thirst, adrenaline and despair. Both characters have to deal with so many different emotions as they do everything they can to make it back to civilisation.

The overall message that came across to me when I was reading this book, was that life is something precious which should be treasured and lived to the full. Rather than planning every second, people should let go and embrace the experiences that are out there. I loved the ending which was truly heartbreaking, but I would have preferred it if the book had been a little longer, so some aspects of the plot and characters could have been developed more. This was still a very enjoyable read however, with a valuable lesson to teach.
Posted by Samantha (A Dream of Books) at 00:00