The Prey by Andrew Fukuda, published by Simon and Schuster on 31st January 2013

Goodreads synopsis:
For Gene and the remaining humans—or hepers—death is just a heartbeat away. On the run and hunted by society, they must find a way to survive in The Vast... and avoid the hungry predators tracking them in the dark. But they’re not the only things following Gene. He’s haunted by the girl he left behind and his burgeoning feelings for Sissy, the human girl at his side.

When they discover a refuge of exiled humans living high in the mountains, Gene and his friends think they’re finally safe. Led by a group of intensely secretive elders, the civilisation begins to raise more questions than answers. A strict code of behaviour is the rule, harsh punishments are meted out, young men are nowhere to be found—and Gene begins to wonder if the world they’ve entered is just as evil as the one they left behind. As life at the refuge grows more perilous, he and Sissy only grow closer. In an increasingly violent world, all they have is each other... if they can only stay alive. 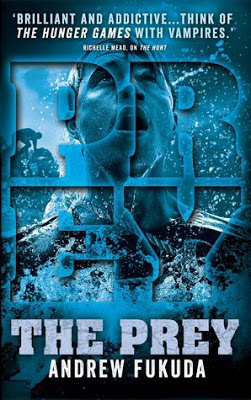 Review:
One of my favourite debut's last year was 'The Hunt' by Andrew Fukuda; a thrilling tale of vampire-like creatures hunting down the last remaining humans or hepers as they are known, to satisfy their ravenous blood-lust.  I've been counting down the days until the sequel, so when this book finally arrived in my hands, you can bet I couldn't wait to pick it up and get stuck in.

The story begins almost immediately after the events of the previous instalment.  Gene is on the run from the Heper Institute, along with Sissy and the other boys.  Having narrowly escaped with their lives, they make their way down the river, seeking the sanctuary that the Scientist promised them was out there.  Their journey is not an easy one however, as they are still being hunted and may be in danger of swapping one prison for another.

There is a real sense of trepidation and fear which emanates from the pages of the book.  Gene and co are living on a knife edge and every decision they make is vital.  What they choose to do may just be the difference between life and death.  I was terrified for them most of the way through the story, as danger seems to dog their every step.  Fukuda keeps the pace high and the tension ratched up.  So much so that there were very few chapters where I could take a breather from the terrible events that occur.  I found this title absolutely addictive reading and so exciting!

When they finally make it to a place called The Mission it looks like their struggle might be over at last.  But things don't seem quite right in their new home as they eventually begin to find out.  I honestly didn't think that Andrew Fukuda could come up with anything worse than they had already faced but fresh horrors presented themselves which had me on the edge of my seat.  The writing is vivid and descriptive and completely gripping.  I was both shocked and horrified at times but also immersed entirely in the incredible world set before me.

Inventive and imaginative, with top notch storytelling and an unbelievably exciting plot, 'The Prey' is a book not to be missed.  I'm already checking off the days until the final part of the trilogy is published in Autumn 2013.
Posted by Samantha (A Dream of Books) at 00:00