Today I'm hosting a stop on the blog tour for Alma Katsu's new book 'The Reckoning'.  Alma very kindly answered some of my questions about her book which is the sequel to 2011's hit 'The Taker. 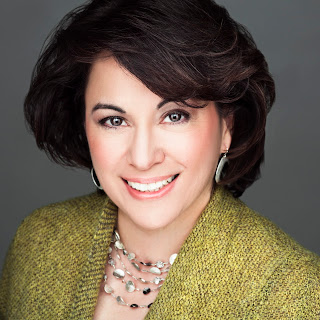 What inspired you to write The Taker trilogy?

I love big sweeping dark stories. I love very bad men and the women who despair of them. I love history and the never-ending mystery of life. I wanted to see if I could write a story that had all these elements, because it seems there were not enough of them.

Was it always planned as a trilogy or did you ever think about it being a standalone novel?

It actually started as a standalone. I worked on The Taker, the first book, for ten years and by the time it was sold to publishers, I’d started missing the characters. They are an endearing, if headstrong, bunch! I thought of a way to continue their story—there were some unanswered questions—and luckily the publishers felt the same way.

In The Reckoning, the main character Lanore meets Lord Byron in 1822. If you could go back to any period in time and meet a famous figure who would it be and why?

It might very well be Lord Byron—mad, bad and dangerous to know! By writing him into the book, I created an opportunity I’d always wanted. It was a lot of fun, too.

The are some wonderful characters in the series. Who is your favourite character to write and why?

It has to be Adair. It is always interesting to be inside his head. Not always pleasant, but interesting. He is so unlike everyone else, so singular in his rationales, it’s like getting to study a psychopath close up. A very charismatic and seductive psychopath.

How much research did you have to do for the series considering all the different time periods and locations that the characters visit? Is this something that you enjoy doing?

I think a writer ends up drawing on things that are already bouncing around in her head. A lot of what ended up in the books has to do with things I’ve found interesting at some point in my life: the dark ages, the British Colonial period (Kipling! The Flashman series!), magic. I did a strange amount of research on castles and life in medieval times, for some reason I’ve forgotten. Luckily it came in handy for writing these novels!

As for the first book, The Taker, which was set mostly in 1820s New England, I didn’t have to do too much specialized research as I grew up in an area that had been settled in the 1700s (I like to call in Colonial ground zeo). I seem to have learned a lot through osmosis. I had to do more research on the early history of the state of Maine since that was more obscure (but fascinating) and a lot of what I learned ended up in the book in one way or another.

Can you tell me anything about what is in store for readers in the concluding instalment?

It picks up a few years after the end of The Reckoning. Lanny seeks out Adair to ask him to help her with something that only he can do: she wants to ask the Queen of the Underworld to release Jonathan. Of course, Adair fears the next plane of existence because he is afraid of being held accountable for his many sins and by sending Lanny into the underworld, he may come to the queen’s attention. Will Adair refuse Lanny’s request? What will happen when Lanny goes into the underworld? Will she be reunited with Jonathan or will her world—and Adair’s—come crashing down? We’ll finally learn the source of Adair’s mysterious powers, too. It’s not what you think it is!

Do you have any plans you can share for future writing projects?

Think I might have to defer on this question. It’s a tricky time, wrapping up one series and thinking about what comes next. I don’t want to jinx myself!

Which other books would you recommend for people who have enjoyed The Taker trilogy?

Readers might be interested in this post I wrote for Heroes and Heartbreakers listing some dark historical novels that I loved. They don’t have the supernatural element but otherwise might be a good fit for Taker fans. The ultimate is Interview With The Vampire, of course!
Posted by Samantha (A Dream of Books) at 00:00