Goodreads synopsis:
Jenna is sweet sixteen, the age when a girl is supposed to find her prince.

Instead she finds Mr Anderson – intelligent, handsome, married Mr Anderson, who just happens to be her chemistry teacher. With a dark past and a difficult family, Jenna is just happy to have someone to protect her, to worry about her, to love her.

But should she be suspicious of Mr Anderson’s reputation for helping ‘damaged’ students? Why is the most popular girl in school suddenly jealous of her? And where is Mr Anderson’s wife? 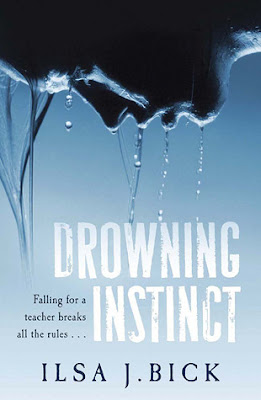 Review:
'Drowning Instinct' deals with the dangerous subject of the formation of an illicit relationship between a pupil and her teacher.  Although this at first seems to be the main focus of the story, it's actually more of a sub-plot to the larger problems that the main character Jenna faces.  She has had to cope with an extraordinary number of traumatic events such as a childhood fire and her beloved brother leaving to join the army.  She deals with her tumultuous family life by self-harming.  When she makes a cut on her body she momentarily feels better but the sense of release never lasts.

Ilsa J. Bick has taken a completely different direction in her new novel.  Having previously read the fabulous 'Ashes' and 'Shadows', I was surprised to see that the topic of this book was the polar opposite to her other work.  'Drowning Instinct' is hard-hitting and quite controversial.  Bick writes with such a deft and sure touch however that I never felt she was forcing any particular opinion on me.  I formed my own ideas about the characters and their motives as the story progressed.

The opening chapter intrigued me from the start.  Jenna has clearly been involved in some kind of accident and is asked to tell the truth about what happened by a police man.  The reader does not know yet what has occurred and so her story begins to unfold.  Her narrative voice drew me in immediately and I felt so much sympathy for her as I learnt more about her situation.  No teen should have to go through the things that she deals with and her life is sadly lacking of any adult that she can trust in and rely on.

There is a non-judgemental tone throughout the book which suggests that things are not always as black and white as they might first seem.  Her relationship with her teacher Mr Anderson develops quite naturally over the course of the book and does not seem predatory on his part, although he is of course in a position of power and responsibility, so the reader must decide whether or not he has abused this privilege.

The ending is explosive and turned everything that happened on it's head.  It made me question what I thought and challenged some of my pre-conceived notions.  Nothing is ever really as we think it is although Bick leaves it up to the reader to ultimately decide whether the line between right and wrong can ever be blurred.
Posted by Samantha (A Dream of Books) at 00:00