One Moment by Kristina McBride, published by Usborne on 1st July 2013

Goodreads synopsis:
It was supposed to be the best summer of Maggie’s life. Now it's the one she'd do anything to forget.

Maggie Reynolds remembers hanging out at the gorge with her closest friends after a party the night before. She remembers climbing the path hand in hand with her perfect boyfriend, Joey. She remembers that last kiss, soft, lingering, safe. So why can’t she remember what happened next?

All it takes is one second for everything to change. One moment to realize that it’s the people you love who hurt you the most. 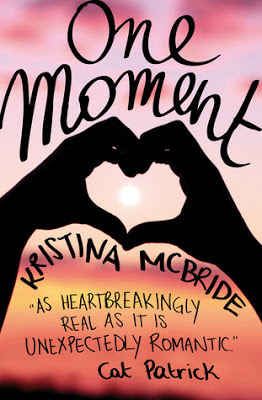 Review:
I've been trying to read more contemporary YA fiction lately and 'One Moment' by Kristina McBride fit the bill perfectly.  It didn't hurt either that there was a quote from Cat Patrick, one of my favourite authors, on the front cover which really sold it for me.

Maggie loves Joey.  It's as simple as that.  Part of a group of six close friends who have grown-up together, their friendship has gradually evolved into something more.  Maggie can't imagine herself with anyone else but the gorgeous, happy-go-lucky Joey that she's always known but when a tragic accident changes everything, she starts to question whether or not she ever knew the real Joey at all.  The plot is actually very simple but when I'd pieced all the elements together it became a moving and eloquent story about friendship and love.

A huge part of the book is Maggie looking back at her time with Joey and recalling small incidences which happened between them in a new light.  I felt an enormous sense of empathy with her as she began to unravel so many truths and lies that had been lying just beneath the surface the whole time.  There was one minor incident near the very beginning which led me to predict what was really going on quite early in the book.  Although I guessed the truth that Maggie was struggling to remember, I still thoroughly enjoyed seeing her gradually work things through for herself in a mature and sensible way.

There is an unexpectedly romantic aspect to the story too which slowly crept up on me.  I'm glad that this was more of an undercurrent than the main focus because I think it would have detracted too much from Maggie learning about true friendship and trust.  A nice balance was obtained between the two and the scene at the end perfectly concluded events.

Moving and emotional and beautifully told, I thought this book was wonderful.  It makes you think what you would do if that image of your perfect boyfriend was shattered into a million pieces.  I will definitely be looking out for more by Kristina McBride in the future.
Posted by Samantha (A Dream of Books) at 00:00