Goodreads synopsis:
Clair is pretty sure the offer in the ‘Improvement' meme is just another viral spam, though Libby is determined to give it a try.

But what starts as Libby's dream turns into Clair's nightmare when her friend vanishes.

In her search for answers, Clair seeks out Jesse - a boy whose alternative lifestyle might help to uncover the truth.

What they don't anticipate is intervention from the mysterious contact known only as Q, and being caught up in a conspiracy that will change everything. 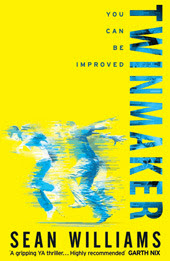 Review:
'Twinmaker' is a sci-fi thriller set in a world which on first appearance seems to be pretty much perfect. People are able to travel anywhere in the world using d-mat technology which can transport them to their chosen destination in a fraction of a second.  There are no limitations to where a person can go and the technology described in the book sounds amazing.  For Clair and her best friend Libby, d-mat is a normal part of their everyday lives, until Libby decides to use it to 'improve' herself.  Improvement turns out to be more dangerous than they could ever have thought possible and changes their very existence.  Suddenly the world doesn't seem so perfect after all.

At the beginning of this book I wasn't convinced that it was going to be my kind of read.  I love dystopian fiction and I'm quite keen on the sci-fi genre but I found the world building at the start of 'Twinmaker' difficult to get to grips with.  There were a lot of new concepts to cope with and I didn't understand all the technological explanations of d-mat and how it worked.  I very nearly gave up but I'm so glad that I stuck with it and kept on reading because Sean Williams turned out a great story which was thought-provoking and interesting and raised so many ethical questions that I'm still pondering some of them now.

It is quite a long book at over 500 pages and in places I thought that it could have been trimmed a little but once I got over my initial confusion about the direction of the story it really took off.  Clair is a great heroine who surprises herself with her strength and bravery and she is at the heart of the plot.  It's on her shoulders that the future of the world rests but she is more than capable of the journey ahead of her.  There are some intriguing secondary characters in the book as well, including the elusive Q, bad boy Zep and Clair's counter-part Jesse who I really liked.

This is the first in a trilogy so there were a lot of questions left unanswered at the end, but I'm hoping that these will all be addressed in the sequel which will be out in 2014.
Posted by Samantha (A Dream of Books) at 00:00