Synopsis:
Dina has unwillingly inherited her mother's gift: the ability to elicit shamed confessions simply by looking into someone's eyes. To Dina, however, these powers are not a gift but a curse. Surrounded by fear and hostility, she longs for simple friendship.

But when her mother is called to Dunark Castle to uncover the truth about a bloody triple murder, Dina must come to terms with her power--or let her mother fall prey to the vicious and revolting dragons of Dunark. 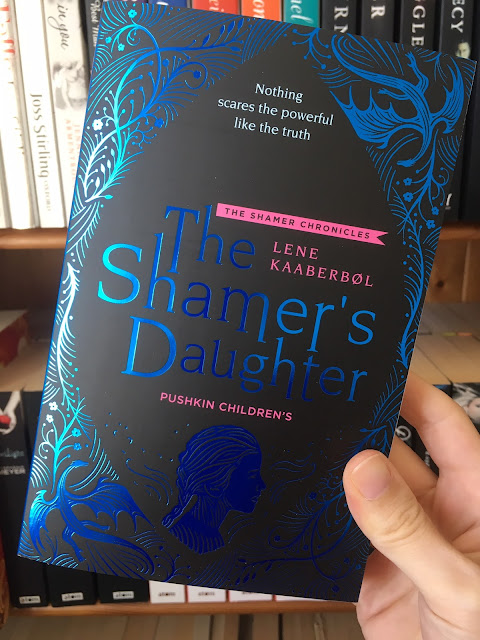 Review:
'The Shamer's Daughter' is the first in a middle-grade fantasy series called The Shamer Chronicles. Although aimed at a slightly younger audience, I found the book really enjoyable and I think there is a lot in it to appeal to older readers too. The series is written by a Danish author who is also responsible for translating it into English. Although originally published in 2002, I have to admit that I hadn't heard of the series before, so it's great that Pushkin Press are republishing all four books for a brand new audience of readers.

What originally appealed to me was the description of the book as high fantasy with dragons, magic and adventure. I also noticed that comparisons had been drawn between this series and His Dark Materials (which is one of my favourites!), so my expectations were pretty high.

The story revolves around the main character Dina. An 11 year old girl who is the daughter of a Shamer and who has inherited her mother's gift. They have the ability to look into another person's eyes and see all of their guilty secrets. Although this is an incredible power to have, Dina often sees it as more of a curse because of the fact that no one wants to be friends with her or can look her in the eye. One night, Dina's mother is called upon to go to Dunark Castle, after a terrible crime is committed. She is tasked with helping to identify the guilty party. However, things are not as they seem and Dina becomes embroiled in a terrible power struggle which threatens everyone she holds dear.

I loved the premise for this story which immediately hooked me in. I don't think I've read anything else quite the same as this which made it very unique. Dina is an absolute delight of a heroine. She reminded me a bit of Lucy from The Chronicles of Narnia because is brave and inquisitive and always ready to help anyone out. Her first person narrative was extremely engaging and I loved her interactions with the other characters, particularly Nico and Rose. Nico is great because although he is flawed that makes him more real and likable. He has his faults but he starts to face up to them. Rose was a fantastic addition to the story because she gives the appearance of being tough but underneath she has her own insecurities and fears. Dina helps her to see that she is not responsible for her own precarious situation in life.

The plot moves quickly and there is so much that readers will enjoy. Yes, there are dragons (and deadly ones at that!) but there is also a dangerous power struggle, a quest for justice and lashings of action and adventure.

'The Shamer's Daughter' is a fast-paced fantasy. I got sucked into Dina's story right from the start and couldn't wait to find out what her fate was going to be. I found it a quick read which was well-paced and crammed full of mystery, magic and mayhem. I'm really eager to read the rest of the series now and find out what other adventures lie in wait for Dina.


If you have enjoyed reading this review and would like to buy the book, please consider purchasing via my affiliate link from Amazon.
Posted by Samantha (A Dream of Books) at 00:00