Forget-Her-Nots by Amy Brecount White, published by Greenwillow Books in 2010

Goodreads synopsis:
Something, some power is blooming inside Laurel. She can use flowers to do things. Like bringing back lost memories. Or helping her friends ace tests. Or making people fall in love.
Laurel suspects her newfound ability has something to do with an ancient family secret, one that her mother meant to share with Laurel when the time was right. But then time ran out.
Clues and signs and secret messages seem to be all around Laurel at Avondale School, where her mother had also boarded as a student. Can Laurel piece everything together quickly enough to control her power, which is growing more potent every day? Or will she set the stage for the most lovestruck, infamous prom in the history of the school? 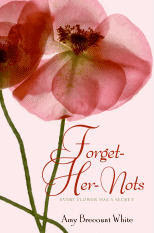 Review:
Laurel's mother has died and she's now attending Avondale School.  It's here that her 'gift' starts to show itself and she learns about her new talent and her family history.  The other girls at the school realise that Laurel's flowers may have the ability to make certain boys interested in them, so they start asking Laurel to make them arrangements, but these don't always seem to have the desired effect.

I had mixed feelings about this book so I'm going to start with what I liked about it first.  I enjoyed the whole concept of 'Flowerspeak' and the language of flowers and the idea that certain people in the world have a gift to enhance the feelings and emotions in those around them by using different flowers.  It was interesting finding out exactly what meanings all the flowers held and there was an additional index in the back of the book which I referred to several times.

What I didn't like quite so much about the book was the slow pace of the story.  It was a little too sedate for me and I kept waiting for something more to happen which never transpired.  It felt a bit like the story wasn't headed in any real direction and so didn't make enough of a point.  I think it might appeal more to slightly younger readers but there wasn't enough content to keep me interested all the way through.  It's a shame because I had high hopes for 'Forget-Her-Nots' and it has such a pretty cover but I don't think it's one that I'll be re-reading.
Posted by Samantha (A Dream of Books) at 09:49