A Beautiful Lie by Irfan Master, published by Bloomsbury on 3rd January 2011

Goodreads synopsis:
An extraordinarily rich debut novel, set in India in 1947 at the time of Partition. Although the backdrop is this key event in Indian history, the novel is even more far-reaching, touching on the importance of tolerance, love and family. The main character is Bilal, a boy determined to protect his dying father from the news of Partition - news that he knows will break his father's heart. With great spirit and determination, and with the help of his good friends, Bilal persuades others to collude with him in this deception, even printing false pages of the local newspaper to hide the ravages of unrest from his father. All that Bilal wants is for his father to die in peace. But that means Bilal has a very complicated relationship with the truth... 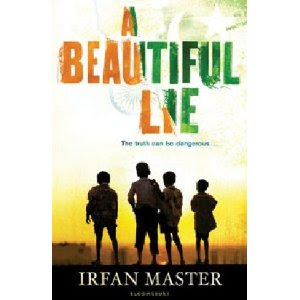 Review:
I received this book to review and was initially a little unsure about whether or not I was going to enjoy it.  Although I am a fan of historical fiction, I tend to read books set against an English or American backdrop, so a story set in India is not normally the sort of thing that I'd choose.  However, it was a really interesting read and taught me a lot about a key event in India's history.

The story is based around the partition that took place in India in 1947, when India won freedom from British Colonial rule and Pakistan was created.  This led to a split along religious lines.  The story is narrated from the point of view of a small Indian boy called Bilal, who wishes to keep the news of the partition from his dying father.  He believes that the partition would break his father's heart so he recruits his friends to help him with his lie.  I loved the way that Bilal's friends all banded together to support him with his decision.  Although religious differences eventually come between some of them, they're best of friends and will do anything at all for Bilal.

I knew nothing at all about the history of India before reading 'A Beautiful Lie' and it was both fascinating and educational learning more about the partition and understanding the repercussions that it's had and the long-term effect it's caused on the people of India.  The book was fast-paced and interesting and I was swept along with Bilal's story.

Thanks to Bloomsbury for sending this one for review.

This is the first book I've read as part of the British Books Challenge 2011.
Posted by Samantha (A Dream of Books) at 09:33