The Memory Cage by Ruth Eastham, published by Scholastic on 3rd January 2011

Goodreads synopsis:
Alex's Grandfather keeps forgetting things. Desperate to help him remember, Alex starts collecting old photographs. Bust as Alex digs into his grandfather's past, he stumbles across secrets that have been buried since World War II. Uncovering the truth could save Grandad ... but it might also tear Alex apart. 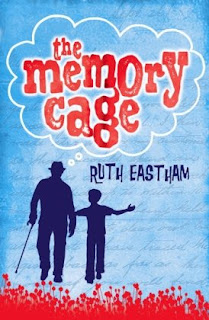 Review:
'The Memory Cage' is a debut novel by British author Ruth Eastham, who has been compared to Michael Morpurgo.  That's high-praise indeed but it's also well-deserved.  It's a powerful and emotional story, dealing with universal themes such as family and war.

Alex was adopted from Bosnia during the Yugoslav Wars.  He's formed a close bond with his new Grandad, who rescued him and brought him to England.  Alex loves his Grandad immensely but his grandfather's memory is failing and he's in danger of being taken away.  Alex determines to stop this from happening by helping him remember the events of his life.  This however, leads to a number of long-buried secrets being revealed and painful memories resurfacing of his time during the Second World War.  As Alex's Grandad begins to deal with the events of his past, Alex too has to face his own history before he can begin to move forward.

This book deals with a number of difficult and serious subjects such as adoption and alzheimer's disease, in a thoughtful and sensitive manner.  For the age group at which this book was aimed, I felt that this could have been done in a heavy-handed way but instead the right balance was achieved between a serious exploration of the issues and pure reader enjoyment in the story.  I found myself being caught up in the lives of the characters and becoming completely engrossed in the book.  I'll also admit to crying a fair bit near the end!

This is a beautiful debut novel and I look forward to future books by a talented first-time author.

Thanks to the publisher for sending this one for review.