Glee: The Beginning by Sophia Lowell, published by Headline on 5th August 2010

Goodreads synopsis:
Get more of your favorite characters in this official Glee prequel!
All great performances deserve a warm-up! Enroll early at McKinley High--before New Directions was even a glimmer in Mr. Schuester's eye. When did Rachel first decide Finn was more than just a jock? When did Puck and Quinn start their secret romance? And how did the fledgling Glee Club function without a fearless leader? Hint: It wasn't exactly a perfect melody.
Break out the gold stars and refill the slushies: It's time to find out what happened to all your favorite characters before the show-mance began. 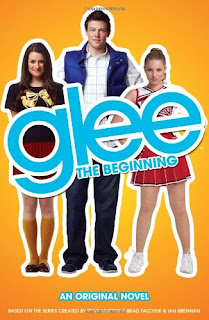 Review:
All you Gleeks out there (of which, yes, I am one!) will love this book which is a prequel to the phenomenal smash-hit TV show.  There's a danger with TV tie-ins that they won't capture the spirit and enjoyment of the show itself but there's no need to worry about that here because Sophia Lowell has done a tremendous job of transferring the essence of Glee into the written word.

I had fun finding out about all my favourite characters before they formed 'New Directions' with Mr Schuester, their Spanish teacher at McKinley High.  We get to see Rachel joining Glee Club and determining to become a big star; the beginning of the love triangle between Finn, Quinn and Puck (which was touched upon in the TV series but never gone into in any depth); Tina and Artie's blossoming relationship and the close friendship between Mercedes and Kurt.  I loved the story and I liked the fact that it actually added a lot of insight into all the characters.  I got to understand more about Rachel's fear of being stuck in a small town which fails to recognise her talents and Tina's lack of social skills which have left her always sitting on the sidelines and the Glee kids desire just to try and fit in somewhere during the rocky ride which is high school.

This is a fun and fabulous read which left me with a big smile on my face when I'd finished.  Although, as others have pointed out, there were a couple of things which didn't match up with the TV show, I really didn't care and it didn't spoil my enjoyment of a fantastic book.

Even if you've never watched Glee before (and if you haven't then you really should!), I guarantee that you'll enjoy this book.  The second book in the series, 'Glee: Foreign Exchange', is published by Headline in February 2011.
Posted by Samantha (A Dream of Books) at 05:00