Goodreads synopsis:
The queen of fairies took me To yon green hill to dwell . . . No one believes in fairies any more. No one goes up to the common. Except Franz. Something is there, watching him. Something cold and wild. And pleasant is the fairy land But an eerie tale to tell. Edrin is no longer safe. Her tribe is plotting against her, with hatred in their eyes. Why is she so drawn to the human boy? Can he save her from the cold - and from the tribe? 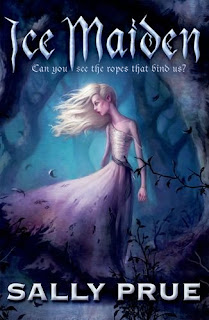 Review:
This was a really interesting little book combining faeries with a lonely young boy and interweaving themes of survival, war, isolation and what it means to be an outsider.

The story takes places in England, 1939, shortly after the events of Kristallnacht (Crystal Night) in Germany when the Nazis attacked the Jews.  Franz and his parents are now living in England after leaving their home in Berlin behind.  Franz feels alone and estranged from his parents, who he believes to be loyal Nazis, capable of turning their backs on those in need.  He nicknames them The Wolf and The Squirrel and carefully guards his feelings from them but there are some surprising revelations in store for him regarding his family.

Franz's story is mirrored with that of Edrin, an ice maiden who lives on the common and who feels set apart from the rest of her tribe.  She's not your usual happy and carefree faery.  She's actually far from the stereotypical image and along with the rest of her tribe, is vicious and ruthless and intent on murdering her rivals before they can put an end to her.  When she and Franz come together there's a surprising conclusion to their story, as they come to help each other when they both need it most.

This book was very different from anything else I've read lately and actually has a serious message to convey about the morals of right and wrong and good and evil.  It teaches about aspects of German history and the persecution of the Jews but in a careful and thoughtful way.

I received a proof copy of the book which has a plain blue cover, but the final cover art is gorgeous and would definitely make me want to pick this off the shelves.  I love the colouring in particular - with the pretty blues and pinks which seem to merge together.

'Ice Maiden' is the Prequel to 'Cold Tom' by Sally Prue, so I'm hoping that it explains more about the history of the Tribe and possibly provides more of the back story of Edrin.
Posted by Samantha (A Dream of Books) at 10:54