Blood Ransom by Sophie McKenzie, published by Simon & Schuster in 2010

Goodreads synopsis:
The long-awaited sequel to the award-winning Blood Ties by the bestselling Sophie McKenzie. Clones Rachel and Theo now live thousands of miles apart. They keep in touch, but things just aren't the same. When Rachel discovers that evil scientist Elijah is still working in secret for a section of the government and about to murder Daniel, she sets out to rescue the little boy, but her plans backfire with disastrous consequences. Theo sets off to find her. 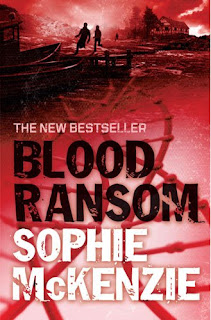 Review:
I absolutely loved 'Blood Ties' when I read it earlier this year and had no idea that there was going to be a sequel.  Imagine my excitement when I saw this in my local bookshop!  I bought it immediately!

This book is a perfect read for when you get home after a long day at work and you want to pick up something that will make you forget everything but the story you're reading.  The action picks up within the first few pages, with very little prelude and maintains a constant pace until the end of the book.  There's excitement, suspense and tension which absorbed me totally and I found that I couldn't turn the pages fast enough.  There are plenty of thrills and spills and revelations around every corner.

As well as being a brilliant thriller, the book also raises a number of serious scientific, ethical and moral questions which are laid open for consideration.  What are the barriers that shouldn't be breached, even if it may help humanity in the long-term?  Sophie McKenzie doesn't shy away from anything.  She tackles everything head on, which is one of the aspects that makes this such an amazing book.

I loved revisiting the characters of Rachel and Theo.  The chapters alternate the narration between them which works well to present their two points of view and also keeps the story exciting because we get to follow both of them on their mission to stop evil scientist Elijah.  Although it may be a little far-fetched in places, particularly when you remember that Rachel and Theo are both teenagers, I recommend suspending your belief for a short time, getting comfortable and sitting back to enjoy a fanastic, thrilling read.

This is the second book I've read as part of the British Books Challenge 2011.
Posted by Samantha (A Dream of Books) at 12:24