Goodreads synopsis:
In the Society, Officials decide. Who you love. Where you work. When you die.

Cassia has always trusted their choices. It’s barely any price to pay for a long life, the perfect job, the ideal mate. So when her best friend appears on the Matching screen, Cassia knows with complete certainty that he is the one . . . until she sees another face flash for an instant before the screen fades to black. Now Cassia is faced with impossible choices: between Xander and Ky, between the only life she’s known and a path no one else has ever dared follow—between perfection and passion. 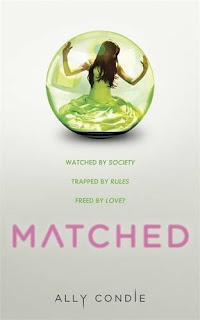 Review:
I'm a big fan of dystopian fiction but when I thought back to which books I'd actually read, not many sprang to mind, except for the fabulous 'The Handmaid's Tale' by Margaret Atwood and more recently 'The Road' by Cormac McCarthy.  I don't think I'll have any problem remembering 'Matched' however.  I absolutely loved it and it's a perfect example of dystopian fiction which lives and breathes in your hands and your head.  I know it's only January but I have a feeling that this is already going to be competing for my book of the year.

What I enjoy most about this genre is reading about the imagined world as it may become in the future.  Yes, obviously we can't see into the future but who's to say that these things won't actually happen.  We have no idea what awaits humanity.  It's both chilling and frightening and intriguing all at the same time.  Cassia lives in a perfect society governed by officials who make all the rules and decisions for people - who they marry, how many children they have, when they will die, where they will live, what job they have and so it goes on.  People are given pre-packed meals catering to their individual dietary requirements and there has been a cull of art, poetry and books with only a hundred items of each selected to remain in popular culture.  The latter is horrifying!  I'm someone who loves culture and being surrounded by literature and theatre and art.  I can't imagine only being able to read a prescribed 100 poems and not having the ability to write and create.

All choice and free will has been eradicated in cultivation of what the officials call an equal society.  Cassia believes in the virtues preached to ber by the officials and the story begins as she is about to attend the ceremony that will 'match' her with her future husband.  All goes well until a mistake is made and Cassia's whole life is turned upside down.  Her future is no longer clear cut.  Cassia is a strong central character who begins to question the rules and regulations which are imposed upon society.  She finally starts to see things clearly for the first time in her life and fights back against the bonds which are imposed upon her.

The love triangle between Cassia, her best friend Xander and neighbour Ky is dealt with sensitively and thoughtfully.  When Cassia does finally make her choice, I liked the fact that it wasn't necessarily a choice which would isolate her from one or the other.   She loves both boys but in different ways and it was nice to see those feelings explored.  She has known Xander all her life and they've grown up together so the potential is there for them to have a long and happy life with each other but there's also Ky with whom she feels the first blossomings of a love that's new and exciting and real.  He teaches her about things she has no knowledge of and they learn and grow together.

Hope is a significant theme in the book.  The idea that there's always something to hope for and that however much you may have to struggle and however futile things may seem at times, hope always remains.  That meant that the book ended on what I thought was quite an uplifting, rather than bleak, note.

Ally Condie's prose is exquisite.  I savoured every single word.  I felt like I was living Cassia's story with her and experiencing the same emotions and feelings.  I'm hugely impressed by this sensational debut and thrilled that Condie is planning a whole trilogy.  There's so much more to come and I'm excited to see where the story is going to go next.  The film rights have also been sold to Disney so there's a big screen outing for 'Matched' sometime in the future too.

Thanks to the publisher for sending me this one.

If anyone has any suggestions for great books in the dystopian genre it would be great if you could drop me a comment.  I know that there are heaps of books out there and I really want to read more like this.
Posted by Samantha (A Dream of Books) at 12:36