Goldseekers by Jane Johnson, published by Scholastic on March 7th 2011

Goodreads synopsis:
In 17th century Cornwall, Jude's mother was called a witch. Her son is a 'finder' with a rare and strange power. He can sense the presence of gold wherever it is hidden. But Jude's talent is dangerous - especially when he leaves his childhood home after his parents' sudden deaths. Captured by a sinister, one-eyed sea-captain, he is plunged into terrifying magical adventures on the magnificent and mysterious Cornish coast. Battling Barbary pirates, slave-stealers and an evil telepathic cat, he is befriended by a family of gold-hungry djinns, doomed to dwell for eternity among the legions of the damned unless he agrees to save them. 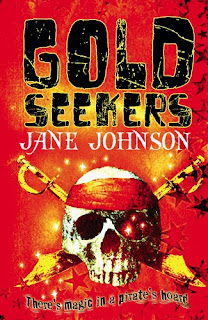 Review:
This book is described as 'Moonfleet meets Treasure Island meets The Arabian Nights'.  When I read that it certainly piqued by interest and got me bumping this up my TBR list as soon as it arrived.  The description is apt because it contains some elements of all three but is also an original and fresh take on the historical fantasy genre.

'Goldseekers' is a really exciting adventure story, combining magic and fantasy with elements of reality.  When Jude Lanyon is orphaned at the age of twelve, he has no idea what his future has in-store for him and no way to predict the intrigue, mayhem and adventure that awaits him.  He becomes embroiled in one calamity after another but he's brave and courageous and quick-witted.  He also has a special gift - to sense and find gold, which sets him apart from the rest and it's this special talent which may just save him in his time of need.

I loved the character of Jude and I adored his little kitten Byasen, who he's able to communicate with through thoughts alone.  Imagine being able to communicate with your pet!  I expect a lot of people would like to have that particular talent!  Jude is an appealing and likeable hero that leads the reader on a rollickingly good ride with surprises around every corner.  There are pirates, sea captains, djinns and talking cats - what more could you want!

Although this would probably appeal to slightly younger readers, it's still an immensely enjoyable and fun story for adults and children alike.  It's not published until 3rd March but I'd recommend grabbing a copy when you see it.

Thanks to the publisher for sending this one for review.
Posted by Samantha (A Dream of Books) at 11:00