Diary of a Parent Trainer by Jenny Smith, published by Scholastic on 3rd March 2011

Goodreads synopsis:
A must read novel for anyone requiring tips on how to control this bizarre species by (undiscovered) genius Katie Sutton - a fabulous, funny new teenage character who rivals Georgia Nicholson with her wit.

Katie is an expert on operating grown-ups. She knows exactly how to get the best out of them, so she decides to write a guide to help the world's long-suffering teenagers do the same.

But then Katie's mum starts dating the awful Yellow-Tie Man. Suddenly Mum is acting completely out of character and totally out of control! For everyone's sake, Katie needs to use all her expertise to get rid of him - and quick! 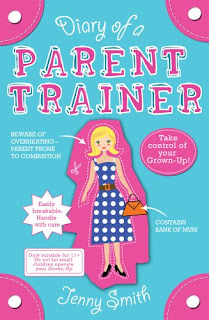 Review:
This was a lovely little book which I think will definitely appeal to a slightly younger teen audience.  I found it a quick and enjoyable read which I'm hoping might be the first in a series as I'd really like to read more by Jenny Smith.

Ever wondered how to cope with your parents on a daily basis?  Wonder no more, because thirteen year old Katie Sutton has all the answers in her operating guide for grown-ups.  The book consists of a series of diary entries containing advice and hints on how to handle your grown-up when they're in a range of different moods.  Katie thinks she knows it all but when her Mum starts acting out of character she suddenly has to throw the rule book out the window!

Katie is a wonderfully fresh and original teenage voice.  Her character is extremely realistic, experiencing all the same emotions that teenagers the world over face and I certainly found myself identifying with some of what she has to go through.  She's an appealing narrator because she's funny and witty and a great central character.  I also loved her younger brother Jack who tells it like it is, her older sister Mandy who has boy troubles of her own and her cute west highland terrior Rascal.  They make a great family unit and really pull together when it matters most.

The book touches on serious issues as well, such as the death of Katie's father and the siblings having to adjust to there being a new man in their mother's life.  These were handled sensitively and realistically and were a nice balance to the lighter aspects of the story which covered dealing with the opposite sex and the pangs of first love.

This is a brilliant debut novel which made me laugh and smile and is sure to appeal to a wide female teen audience.
Posted by Samantha (A Dream of Books) at 00:00